Once Upon a Time slot review

Play Once Upon a Time

Once Upon a Time, there was a slot game that went by the same name. It was a mighty and a pretty game, and a knightly adventure filled with dragons, goblins, catapults, and a princess.

Once Upon a Time looks and feels like a fairytale and as far as I know, the objective of a fairytale is to be charming. Betsoft is successful in achieving that kind of a premise with the help of their lively animation style, and with a little bit of humour.

My personal highlight is that there are six bonuses. Either one of these can bring you a cash prize in the form of instant win, free spins, wild reels, or by choosing a method of dealing with a green dragon in the animated mini-game.

As far as bonus features go, Once Upon a Time is mint and even more so thanks to the medium volatility which can result in payouts ranging from low to big. Anyone that wishes to embark on this kind of adventure can play across 30 selectable paylines and find a solid theoretical return to player (RTP) of 95.25%.

My first impression of the game is that the symbols are a tad on the juvenile side. The style of drawing and rendering reminds me of video games from the early 90s and that may put some players off, knowing that there are games with mind-blowing graphics out there.

Nevertheless, if you can relish some good-hearted nostalgia, like me, you may find Once Upon a Time nothing short of charming. Betsoft takes care of the animation and I can guarantee that it will take a whole before you get bored of the gameplay.

Another element that's part of the design is the sound. I like the audio track as it sounds to me like it was performed by real musicians. I can recognize the effort by Betsoft to make this game a full-blown fairytale, so why not give it a chance altogether, with the sound on?

Most of the games by this company have three or four extra features, but it looks like Betsoft topped itself with this release. Six features in total seem pretty OK to me and I've noticed that the volatility doesn't prevent either of these from triggering on not-too-long intervals.

This feature turns the reel in the middle into a wild that can substitute for all of the standard paying symbols. To get it to trigger, the dragon symbol needs to land at the top row of that reel. That makes this feature quite particular but it comes with perks.

If you land a dragon on any position on the middle reel the game awards you 60 credits and if a dragon tail treasure symbol lands anywhere on the screen, the wild reel stays intact for another spin.

The title may be long, but this is a pretty straightforward bonus. Land the symbol of the princess next to that of the knight on paylines 1, 2 and 3 in return for an instant win.

Again, a very descriptive name for an extra feature, but it is telling of what the feature is about. If you land three stump treehouse symbols on an active payline that falls on reels 3, 4 and 5 you'll receive 60 credits and a random number of free spins.

Sadly, there aren't any particular features that are part of this bonus, like wild reels or 2x win multipliers but getting additional tree stump symbols can prolong the feature by adding extra spins.

Part of the bonus symbols are those leather sacks that belong to the goblins. Three of these symbols anywhere on the reels trigger a choosing bonus that can result in repetitive prizes, as long as you avoid the eventual outcome that states "Collect".

This is another pick-me bonus that lets you choose from several objects of value that are to be pilfered by the unruly goblins who've found their way inside the castle.

By landing three knight symbols on an active payline (reels 1, 2 and 3) you trigger the bonus where the hero can show his valiance. Your input is required to select the type of weapon to be used on the dragon. You'll chase the creature away regardless of your choice and in return, you'll get an instant prize.

I am not overly impressed by the paytable. For the most part, the potential payouts are alright. Out of eight paying symbols, two can pay 10x your bet or more for five matching symbols. These are the trumpeter, the dragon's tail and the princess.

The chicken, the sword in the stone and the catapult symbols can pay between 5x and 8.33x your bet, which is decent enough, but you'd have to see five matching symbols across a payline.

In all likelihood, the medium volatility that's the norm of Once Upon a Time will tend to trigger smaller payouts, mostly consisting of three and sometimes four symbols. On the other hand, this is balanced off by the extra features.

As I said, six features are plenty and these tend to crop up during the gameplay, making this fairytale fittingly eventful.

Slot players who are familiar with games released by Betsoft in the past three years wouldn’t care to approach any of the low and medium-volatility games released seven or eight years ago. You are hardly going to find a high-volatility slot from that period, but I think the thrill of playing is still there. As for Once Upon a Time, if you choose to try the game, you’d be playing for the extra features as the potential of the base game is quite limited.

Play Once Upon a Time for free

Browse casinos with Once Upon a Time and other slots from Betsoft. Create an account and try the game for free before making a deposit.

You can play Once Upon a Time in English, Finnish, Swedish, German and 21 other languages.

Once Upon a Time supports GBP, EUR, USD, CAD 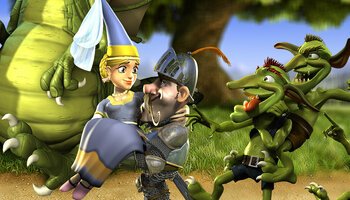