Opal Fruits makes limited use of its fruits to bring about a strange slot that uses some irregular reels that help create wins. Players who give this game a try will also be helped along with Wilds, free spins and cascading reels.

The slot was released in 2019 by Big Time Gaming, this developer combines a rather confusing mix of fruits, features and looks. My first impression of the slot was a game that had been out for quite some time considering the rather ugly graphics so it was a surprise to learn it is one of their newest slots. It might have intentionally looked to evoke the older style of graphics though, as the elements are rather more modern.

The game has a 6-reel, 3-row playing field with a 4-tile row above and below the game. These all work together to determine wins and to show which symbols will replace the cascading reels. This can make the game quite overwhelming and it took me some time to get a grasp of the way the slot actually plays. In total, the game comes with 5,625 paylines.

I found the slot to have a confusing style and theme. The symbols are either fruit symbols or card letters, neither of them expressing a tonne of creativity. They are also made to look very colourful and garish in their presentation. It seems like the symbols are supposed to resemble jewels or gems.

Opal Fruits has a rather large number of different symbols which can appear as either low-paying card letters or higher-paying fruit symbols. The payouts for wins are low, even for the larger ones as the game counts on cascading reels to trigger bigger wins. It should be no surprise the game lands on High Volatility.

If you are uncomfortable with its volatility, or you want to spend some time seeing how often and how much the game pays out, the game offers the ability to change your bet. Players can pick a bet between £0.10 and £20 per spin. The higher the bet, the higher your potential win but it also makes it possible that you run out of funds before you hit a big win. On the other hand, smaller bets will last you longer but obviously, also reduce the size of your wins.

Opal Fruits brings a number of features to the screen with not all of them very original but the combination is rather interesting. The Extra Reels are also an uncommon sight that I will make sure to explain in detail.

First off, a quick overview of the features:

The base game is very similar to the free spins mode with only the multiplier being able to go higher in the free spins part of the slot. While playing in the base game, wins aren’t very common and these are rather low even when they hit. Looking at the payouts, even six-of-a-kind wins will barely pay back a spin.

Where the game holds up is when bigger wins are getting won. The problem is that this requires a lot of things to go right at the same time. Getting bigger wins is almost guaranteed to only happen in the free spins mode. This also requires the player to get a series of wins to increase their multiplier. During the free spins mode, a Scatter won’t add extra spins but increase the multiplier by 5 the first time, and by 10 every time after that.

Then it’s a question of getting wins, triggering the cascading reels and having those trigger wins as well. All told, the game depends on a number of features to activate in a perfect row to ever get the right size win and as a result, you can expect a pretty steady decline in funds until that happens.

I found Opal Fruits to be a rather ugly slot that does not have any appeal when it comes to its appearance. Even the sound design is uneven and ugly. This is fine if the game would pick up the slack with its gameplay, but I didn’t think it did that either. Instead, it mostly came across as confusing and unsatisfying.

The main features are the extra reels but by making the Wilds exclusively show up on those, they made the feature even more volatile. It gives the game a very harsh feel that will likely only appeal to the most die-hard heavy rollers. People who don’t like high volatility and the very low opportunity at getting any big wins will probably not enjoy this game.

If you can handle the volatility and the outdated graphics, you might be in for a fun experience. Players can look forward to a max. win of 281,250x their bet which is obviously a crazy high amount, but it’s also very unlikely anyone will walk away with it.

Browse casinos with Opal Fruits and other slots from Big Time Gaming. Create an account and try the game for free before making a deposit.

You can play Opal Fruits in English, Swedish 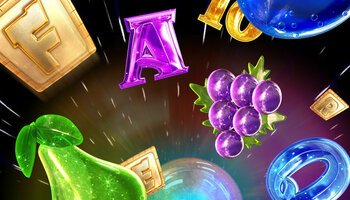