Operation: Diamond Hunt puts the player in the shoes of an international spy on the lookout for a bunch of diamonds. Among the fast cars, golden yachts and beautiful women they’ll also encounter jackpots, free spins and multiplier wilds.

This slot was developed and released in 2019 by Kalamba Games, a rather new studio that is still hard at work making a name for itself. That’s not to say their slots aren’t well-developed but we can definitely see that they might have to invest their time and efforts wisely, having to make choices the bigger studios don’t. The game itself takes place in what seems to be an enormous luxurious castle, while the playing field involves 6 reels and rows that grow in size from 3 to 5 rows and back to 3.

As a result, players have the possibility of grabbing wins on any of the 3,600 win lines. The reels themselves are filled with various symbols that make it clear we’re heading into the opulent world of the ultra-rich. Where even the low-paying card letters are studded with diamonds and the high-paying symbols involve diamond watches, silver guns, roulette wheels and slick sports cars.

Here we can also see that the studio has limited resources as the symbols are somewhat simple and lacking detail, while also not blessed with many animations. It makes the entire game look somewhat static even though the ideas are good. The low-paying symbols are especially simple, although adding diamonds to them was a simple but effective way to make them feel somewhat related to the setting.

Operation: Diamond Hunt does an okay job at setting the scene with its symbols, creating the visual we’ve come to expect from spy movies and novels. The Wild symbol seems to be the agent which is surrounded by all sorts of extravagant items and intense luxury. It makes it feel appropriate for the idea behind the slot, even though they don’t really interact with each other.

The game has High Volatility which comes to play quite often. I found the slot to be rather hard to get wins with during the regular gameplay, and I saw my funds drop rather steadily as a result. The slot offers the possibility of picking a bet between £0.40 and £165 per spin, which is quite a wide range compared to other games. With a max. win of 10,000x your bet, the potential jackpot is consequently enormous but don’t count on winning it.

Besides that, the slot features 3 separate progressive jackpots that can be won by collecting gold symbols on the screen. Since the jackpots are progressive there’s no clear amount to list, but they are divided into silver, gold and platinum.

Operation: Diamond Hunt has quite a few features for a slot that at first glance keeps things simple. Players are engaged throughout the game with these different elements that can activate at random times.

I thought the most unique part of the slot was the gold symbols feature. Even though this isn’t only present in this slot it’s not very common and adds some variety. The 3 high-paying symbols: the car, the yacht and the gun, all come in gold variations that will award bigger wins. Players can pick to activate 1, 2 or all 3 of these during the game, obviously having to pay more if they choose to do that.

The free spins mode turns the lights off in the game and shows us some motion sensors near the floor as the heist begins. Although this mode offers multiplier wilds and I did get some bigger wins this way, activating this mode turned out to be very hard and as a result, it didn’t offer much help.

Operation: Diamond Hunt is a nice slot that is made by a smaller studio that had to choose how much time they were going to spend on its look and its features. By picking the features I think they delivered a more engaging slot while the graphics are maybe a bit outdated already.

That said, the gameplay is what sticks with you and I felt like I had a good time playing this game. I even managed to hit the gold jackpot during my time, which isn’t quite the highest win is still a nice increase to my funds. I think I should mention that even with this jackpot win I still hadn’t recovered my losses, so keep that in mind.

If you’re looking for a slot that throws a lot of features at you but keeps the core gameplay relatively intact, you will get a kick out of this game. I think that even though the graphics aren’t as good as those from bigger studios they do a good job at setting the mood regardless.

Browse casinos with Operation: Diamond Hunt and other slots from Kalamba Games. Create an account and try the game for free before making a deposit.

You can play Operation: Diamond Hunt in English, Finnish, Swedish, German and 9 other languages. 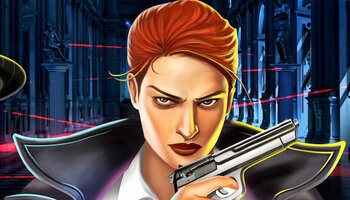