Origami is an endearing slot that uses beautifully folded pieces of paper as the source of inspiration and its symbols to create a truly magical experience. This game doesn’t only use these striking images to give itself colour and style, it also incorporates paylines from both sides and different multipliers.

This game was developed by Endorphina and released in early 2015, but you won’t be able to tell from the graphics. This game has a great sense of style that I have never seen before, and it feels very distinct compared to most of their other slots. All the symbols are folded pieces of paper, made to resemble different types of animals. Whenever they’re part of one of the 10 paylines, they are even briefly animated in fitting ways.

Origami features a 5-reel, 3-row playing field that fills up the entire screen. The colours are rather bright but muted so as to resemble coloured paper, which I think works very well. The animations are simple and quick but make the different animals come to life. The use of different clear colours also makes it easy to tell them apart.

When it comes to the sound, there won’t be as many surprises like the graphics. The sounds that the reels spinning make as well as some win jingles will be familiar to anyone who has played any other Endorphina slots. On the other hand, the different animals all do have their own little sounds when they’re part of a win, like ladybugs flapping their wings or birds chirping.

All of the symbols in Origami are original and made to fit the theme, which is obviously this historically Japanese artform. The game features a number of authentic-looking origami animals, fitting what I think they would look like in real life. The colours are bright and distinct but not too much, giving them a grounded appearance.

The slot has a High Volatility even though there aren’t a lot of different symbols and the paylines count both ways, but the payouts for all symbols are rather low. You will need multiple wins at the same time, or a longer payline, in order for you to make your bets back. Speaking of which, players can pick a bet between £0.01 and £100 per spin. The max. win is a disappointing 500x your bet, especially considering the volatility.

Origami doesn’t have any features that take the player away from the base game, but instead keeping them watching the different animals as they chirp and bark. Most players will be familiar with the features included in this slot:

The paylines from both sides are always active and had a reasonable effect during my time playing, doing exactly what they intend to do. Since it still depends on the symbols dropping down in a particular way it doesn’t alter the gameplay in any actual way.

There is also the multipliers feature, which works rather randomly. This is activated whenever the special character appears, which looks like a cartoon character. It also makes a cute noise when it appears, and another one when it disappears.

Whenever this character shows up it has a random number on its chest. This is the multiplier that is applied to whatever win that appears during that spin. It’s only active for that one spin but it does apply to all wins in that spin. If you have the stars align that could mean a 50x multiplier on a screen full of wins.

Obviously, it usually doesn’t work out that way and in my experience, it was very rare for the multiplier to appear on any spin that had a win at all. This made it rather useless. It does offer up the opportunity of paying off. It also explains the high volatility since you do require the multiplier to make back any number of spins.

As I played the game, I found my funds to drain quite rapidly. With the multiplier not really enhancing any big wins I never felt like I was getting my coins back either.

Origami is a slot with a very distinct personality, where especially the graphics jumped out at me in a positive way. Endorphina has gotten a reputation with me for being rather middle of the road when it comes to their looks and themes, but Origami is definitely one of the more creative slots I’ve seen anywhere.

That’s not to say the gameplay is very original. In fact, it’s very basic and most players will be instantly familiar with how it plays. There are only a few features and even those don’t offer a big impact on the slot.

Players that want something cute and colourful to play without having to worry about free spins or bonus games, with little surprises when it comes to gameplay will enjoy Origami. For everyone else, they’ll probably enjoy the special look of the game but then move on to some other slot.

Browse casinos with Origami and other slots from Endorphina. Create an account and try the game for free before making a deposit.

You can play Origami in English 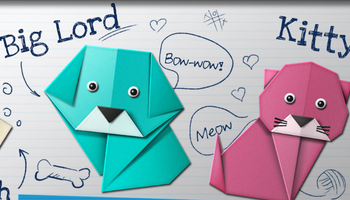