Crazy, but that's how it goes. The prince of darkness, Ozzy Osbourne, got his own slot and it rocks like a bat from Hell.

NetEnt released the Ozzy Osbourne slot in late 2019. It forms part of NetEnt’s music-themed slots alongside Jimi Hendrix, Gun’s ‘N Roses and Motörhead. Like its predecessors, Ozzy’s slot is made with care.

Simply put, this game is great. A lot of time and love has been put into the visuals as well as the mechanics. The game is full of little nods and references to Ozzy’s musical career. NetEnt paid a lot of attention to details and added some nice twists and surprises. Just wait until you get a big win and you know what I’m talking about.

Ozzy Osbourne Video Slot is a high-intensity, high-volatility, five-reel, 25 payline slot with an RTP of 96.30% and attitude for days. Turn the volume up and get ready to rock with Ozzy. And bats, watch your heads.

When you start up the game, you hear the intro from Mr Crowley and see a cartoon-styled temple with bats flying out. On the throne, sits a feather-clad prince of darkness. The time has come to bark at the moon.

This game is simply gorgeous. There is just no way around the fact that this is an amazing looking game. The art style is on point and plays well with the theme. Dark, cartoony and devilish are words that could either describe this slot or Ozzy himself.

The game’s soundtrack features a couple of songs from Ozzy and Black Sabbath. You get to hear Mr Crowley, Bark at the Moon, Crazy Train and Diary of a Madman. I was pleasantly surprised that they didn’t go with the most obvious songs. Crazy Train is perhaps the most well known of these. Apart from its huge success, it was the theme song of The Osbournes, a reality show about the Osbourne family.

Ozzy is the man of the hour, so you can be sure that he is a symbol in the game. Surprisingly, Ozzy isn’t just one symbol, he is four. All the high-paying symbols are Ozzies from different points of his life. If you know your Black Sabbath, you know where they’re from.

I have to mention that NetEnt did a wonderful job with the low-paying symbols. They are card symbols, but they are so stylised that you won’t even notice. They look simply amazing.

Two special symbols can also be found on the reels. A bat is the wild, which can substitute any other regular symbol, and the Crazy Train is the scatter. The scatter can activate the Re-spin and the Free Spin features depending on how many you get.

One thing I didn’t like about the symbols is that some of them are too similar. Ozzy’s face on all the high-value symbols was a bit confusing in the beginning. Then I realised that I need to watch the colours and not the faces, which made it a lot easier.

This is a high-volatility slot and you can tell. I found it hard to get any decent wins during the normal gameplay and was basically just trying to keep the game going. When I hit that Crazy Train, everything went nuts. The Free Spins feature is absolutely bonkers and has potential for massive wins.

When playing with the prince of darkness, is the risk ever high enough? If you want more excitement, just hit the Bonus Bet button and play for higher stakes.

When you activate Bonus Bet mode, you will double your bet, and at the same time, increase your rewards. You will get bigger multipliers, more free spins and the special features activate more often.

Who wants to play with just the regular symbols? Charge them up and play with something better. When the Symbol Charge Up feature activates, the game will randomly choose a symbol and a power-up, and then upgrade every copy of that symbol. The charge up will last to the end of that re-spin or free spins.

The Symbol Charge Up has multiple options on what you can get. You can imprint the symbols with a higher multiplier, add a cash prize to them, upgrade them to the next better symbol or even convert all of them to wilds.

Crazy Train scatter symbols will reward you with extra spins. If you get only two of them, you get on re-spin. But before you get to do that, you will try your luck with the Symbol Charge Up feature. One of your symbols will be upgraded and then you get to re-spin the reels.

In the normal mode, you get 4 free spins. If you have Bonus Bet active, you will get 5. It doesn’t sound like a big improvement, but these aren’t your run-of-the-mill spins. They cascade into bigger and bigger wins. Extra multipliers, changing some symbols to wilds, upgrading common symbols and getting all of this in a single spin can be huge.

Ozzy got himself a great slot. I love how they were able to get the mythos behind Ozzy and Black Sabbath into a slot so well. It doesn’t feel like a game about Ozzy, but rather Ozzy in a slot form. If it wasn’t for the gambling, it could have been bundled up as a special feature on some album.

There are slots that you simply love to play. Some because of how mellow they are, some because they have great music, others because of the mechanics and so on. This slot ticks off so many boxes on that list that it’s uncanny.

I do need to emphasise that this is a high-volatility slot. It is clear that if you don’t hit those special features, you will lose your bankroll pretty quickly. But if you hit them, are you in for a wild ride.

I can’t say that this is my favourite slot, but I do know that I will play this again. When the mood hits me and I want to play for higher stakes, this is the slot of choice.

Browse casinos with Ozzy Ozbourne and other slots from NetEnt. Create an account and try the game for free before making a deposit.

You can play Ozzy Ozbourne in English, Finnish, Swedish, German and 20 other languages. 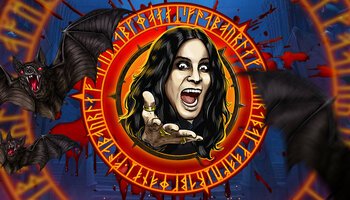