Pachamama is a slot that takes a supernatural look at an ancient jungle. The players are greeted by a variety of mysterious symbols while special features like Wilds and a Bonus Game offer extra layers to the gameplay.

The slot is developed by Endorphina and was released back in 2014 as part of a big collection of slots. The game is set deep in a dark jungle, where there isn’t a lot of things that keep us safe but instead we’re surrounded by dangerous items. The graphics still look acceptable even though the game is getting up there in years, but it was clearly not developed for a desktop computer.

Not only are the controls intended for a touchpad, but the graphics also become blocky and vague when made to fit a monitor. On the other hand, the game still looks great on a phone screen. I would recommend staying with the phone if you want to play Pachamama. The animations in the game are simple but offer some clear movement and the 5-reel, 3-row playing field with 25 paylines offers enough space for these symbols to show themselves off.

When it comes to the music I’m afraid there isn’t much to say that I haven’t said about all other Endorphina slots that were released in that year. They all use the same basic jingle whenever the reels spin or there is a win, but occasionally there will be an original sound that fits the jungle theme a little better. Especially the bonus game had some special sound effects but unfortunately, they didn’t play very often.

The symbols in Pachamama are mostly actual symbols, created to resemble ancient Aztec or Incan symbols that might have really existed. Some of the other art in the game also takes inspiration from these cultures, as can be seen by the pyramid that appears during the bonus game.

The symbols are all pretty abstract and it was sometimes hard to tell them apart, especially when some of the colours like brown, tan and black look very similar. Whenever there’s a win the game does show the payline they’re part of and play a brief animation to make it obvious where the coins come from!

Speaking of coins, players can choose a bet between £0.25 and £250 per spin, making it as risky as they feel comfortable with. The slot has a High Volatility but also the potential to win a grand max. win of 10,000x your bet, which is a lot higher than other Endorphina slots offer.

Pachamama only has a handful of features that have quite an impact on the gameplay but aren’t very common either. The bonus game especially felt very volatile, both in how often it showed up and how much it granted as a win.

I reckon that most players will be familiar with the Wilds as they function exactly how they do in all other slots. They replace a normal symbol to help create a winning pay line, sometimes more than 1 at a time.

The Scatter symbol is a separate symbol that doesn’t act as either a Wild or a Bonus, which they sometimes do in other slots, but they do count towards wins. If the player gets 3 or more Scatter symbols on the screen they count as a win, and they don’t have to be on consecutive reels from left to right.

Players might get to see a lot of Scatter symbols but in my experience they were rare and I only got a win from it a handful of times. Obviously, this might change depending on how it goes for you.

The Bonus Game felt like the most original element of the game for me, with the game awarding the player a coin win depending on where they land on the pyramid that’s shown on the screen. The pyramid has a different multiplier on every level, increasing up to 25x your bet. Players can choose to collect their win instantly, but they can also use 1 or more of their 3 re-spins to see if they can get a better result. Obviously, if they get less than they will have to accept that too.

Overall, the features in Pachamama are acceptable but not as good as they could have been. The Wilds can offer a substantial win if they drop in the right places but this is no different than any other slots that exist.

The Bonus Game is the biggest departure from normal gameplay but it is very poorly explained and it took me a while to figure out I could choose to collect the win or try again, and that you’re not necessarily supposed to spend all 3 re-spins. The Gold Chakana Bonus isn’t explained at all, nor is it made obvious on the screen and I never tried it until after I read the rules.

Pachamama is an average slot, especially compared to the other Endorphina slots they released in 2014. It’s definitely not the worst one but it’s also too unremarkable to be considered one of the better ones. The biggest appeal is the massive jackpot that a player can potentially go home with, but the high volatility makes that a tricky goal.

The graphics are acceptable but as I mentioned before I would suggest playing the game on a mobile phone. The controls are a little too focused on the touchscreen to handle well with the mouse. Unfortunately, the sound is poor on any medium.

I felt satisfied with my time playing Pachamama even though I mostly just lost coins and ended up well below my starting funds. Still, the game offers enough of a unique vibe to feel enticing for a little while, but I don’t think many people will add it to their favourites pile.

Browse casinos with Pachamama and other slots from Endorphina. Create an account and try the game for free before making a deposit.

You can play Pachamama in English 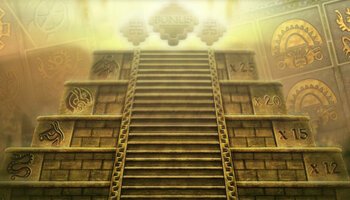