Play Paco and the Popping Peppers

Senor Paco is a mariachi player and master at the craft of making delicious chilli wins. Slot players who are familiar with the game Paco and the Popping Peppers by Betsoft know the drill - land multiple winning outcomes in a row and get a significant boost in favour with the help of rising win multipliers.

The premise of Paco and the Popping Peppers is a market stall off which Paco is selling various vegetables that can go into the chilli mix. The game was made in 2011 and has decent graphics but the focus of the gameplay is on the Cascading Wins payout system that enables players to get bigger winnings from the same bet.

Sadly, this is the only exciting part because the game comes with only one extra feature. I can see why some players may be tempted to try Paco and the Popping Peppers. The payout mechanics can get into a rhythm and grant sizable outcomes that have cost a single wager and you can win multiple prizes from the pick-me bonus feature.

I could feel the excitement that’s caused by the popping of the veggies and the energetic mariachi tune, but at the end of my adventure I was able to name at least five Cascading Wins games with a theoretical RTP value higher than 94.29%.

For the game at hand, Betsoft has applied its famous design formula from ten years ago: lively graphics, lots of animation, few comical details here and there and an awesome musical theme. Paco and the Popping Peppers is fun to play because of all of this. Paco, the vegetable vendor and mariachi, can be seen dozing off but also celebrating your winnings.

The part of the design that I enjoyed the most is the animation around the symbols. The bell peppers, bulbs of garlic, onions, tomatoes and pineapples have been given a personality and every piece of vegetable makes a funny face before it pops into a payline win - hence, the name of the game.

Few comical details make up the sound design and among these are Paco's celebratory yelps and him hollering and dancing wildly during the bonus game. Did I mention he is very keen on the tequila? If I were a fruit vendor I wouldn't shatter my shot glasses with such ease, even if the occasion demands just that kind of madness.

With only one bonus feature, thankfully there is a wild symbol. Represented by a donkey-pinata, the wild substitutes for all symbols, except for that of the bonus game, and it can pay 500x your payline bet for five on a payline.

This is part of the base game but I should give it the rundown just in case a new slot player is reading my review. Pop Multipliers are the winning outcomes that continue to ring up following the initial win.

Landing a winning outcome makes the matching symbols disappear from the reel set and raise the value of the multiplier. The new symbols that fill the empty positions can also link with those symbols on the reels and create a subsequent Pop.

The straw-roofed hut is the bonus symbol and you need three of these anywhere on the reels to trigger the bonus game. I can say that I had fun with the bonus on a few occasions. It's a simple game of choosing a high and low card, but unlike the equivalent Gamble option in some slots, here you are given up to three misses before the game is over, so the chances for reaching a higher win are themselves higher.

If anyone asks how I would describe the character game, I'd call it a "vegetable slot" because that's what it is considering all of the symbols. But regardless of how much I love veggies and their vitamins, this collection isn't too keen on invigorating your balance. That is unless you land three or more consecutive wins.

The payouts are quite low across the board. There are four low-paying and four high-paying symbols. The first category can pay between 2x and 25x your payline bet, which translates to payouts between 0.06x and 0.83x your bet for three, four and five matching symbols.

The jalapeno pepper coconut, tomato and pineapple comprise the high wins, which range between 10x and 200x your payline bet or between 0.33x and 6.66x.

I can't say that the paytable structure is totally horrendous because there are some decent numbers on there, however, not every win results in multiple cascades. The end-result of the gameplay is many low-value wins and few potential big wins, if you can get to a win multiplier of 5x or above.

Paco and the Popping Peppers is another example from the family of Betsoft slots that are eager to entertain. Sadly, I don’t think this particular game will enjoy a long shelf life beside Mexico and chilli-themed slots like Diablo Reels or Wild Toro by ELK Studios.

I mentioned at the start the low RTP and I don’t think medium variance can suit well this kind of a game simply because the biggest win multiplier of 10x warrants high volatility and with that, a high payout potential.

Play Paco and the Popping Peppers for free

Browse casinos with Paco and the Popping Peppers and other slots from Betsoft. Create an account and try the game for free before making a deposit.

You can play Paco and the Popping Peppers in English, Finnish, Swedish, German and 21 other languages. 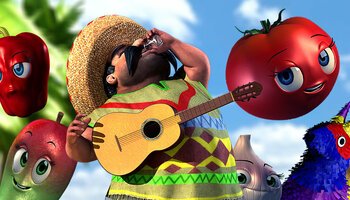