Unexplained scratches and knocking on the walls? The smell of rot? Yep, it’s Paranormal Activity, all right! So, get your video camera ready and go buy an Ouija board - what could go wrong?

If you’re not familiar with the movie or the brand, let’s do a quick recap: When the movie Paranormal Activity hit the theatres, it was quickly declared as a scariest supernatural horror film of all times. It’s a found footage film, meaning the material was supposedly shot by the characters. This subgenre was made widely popular when The Blair Witch Project was released in 1999.

In Paranormal Activity, a couple is experiencing weird phenomenons inside their home. While Katie isn’t too fond of finding out what the entity haunting her life is, Micah wants to document everything and even make a contact with it. The movie was so popular, it got five sequels of which the latest was seen in 2015.

So, Paranormal Activity the slot game has some big shoes to fill - even if it’s not an actual movie.

Paranormal Activity is definitely the scariest-looking slot I’ve ever seen. Even the Wilds are creepy girls with haunting black eyes and blood trickling from her mouth. The game itself looks like a screen from a camcorder. It shows the reels, as well as the background which is a dark room with only a dim light coming from the open door.

The scary ambient music starts already with the loading screen. You get to hear fast footsteps, knocking and demonic screeching - enough to scare off the sensitive ones. Sadly, the track is short and even though it loops quite nicely, it’s way too repetitive.

The game has some nice visual effects, with the title flickering and occasional TV noise covering the entire screen. However, the latter quickly gets old and there’s no way to turn it off. Also, you can only turn the music on or off. However, in general, I think the game looks a bit outdated for a 2017 slot.

The value of each spin is 30 coins, so the paytable also presents the winnings as coins. You may adjust the value of a coin from 1 penny to £1, in which case the maximum wager is £30.

The Bonus Wheel awards you with either an instant win or one of three possible free spin features.

Because I love all horror, naturally I’m also quite familiar with the Paranormal Activity movies. When I learned that there was a slot game with the same brand, I was very excited and couldn’t wait to get to play this one.

After a few hundred spins, I’d say that the slot would’ve probably come out better with another supplier. There’s nothing wrong with iSoftBet, but overall I can imagine seeing how this slot would look like if it was made by NetEnt or Yggdrasil. As it is now, it’s just a bit too old-looking, clunky and slow. The reels usually spin like they’re sticky with something and for a fast player like me, it was a pain in the butt not to be able to use any kind of quick spin or turbo spin.

While I played, I took note that the Bonus Wheel felt it was triggering quite often. On the contrary, the Paranormal Activity (which would add extra Wilds) I saw much less. I didn’t manage to win anything big, and only one round out of three free spin features actually paid up well.

I guess I was a little disappointed. The game does have nice features and a good theme, but the quality just doesn’t meet up with my standards. Also, I think it’s a big problem if something as trivial as visual effect makes me want to stop playing. This is what happened with the constant TV noise pixellating the screen.

If you love horror like me, I think Paranormal Activity is a fun game to try out. But, I wouldn’t spend too many coins on it myself.

Browse casinos with Paranormal Activity™ and other slots from iSoftbet. Create an account and try the game for free before making a deposit.

You can play Paranormal Activity™ in English, Finnish, Swedish, German and 23 other languages. 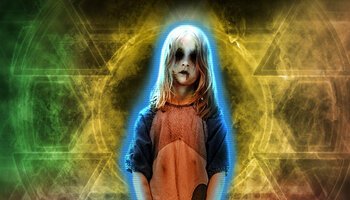