Rich Wilde is searching for the mysterious and valuable Pearls of India in another adventurous slot from Play’n GO.

Rich Wilde is a man of action and adventure. He travels the world in his search for legendary and mysterious artefacts of old. Rich has searched for the Shield of Athena, The Book of the Dead, The Tome of Madness and now the Pearls of India.

Rich Wilde has been the unofficial mascot of Play’n GO for years and he is not the only adventurer in the family. Cat Wilde has her own slot, the Doom of Dead and I expect to see more of her in the years to come.

Pearls of India was released in 2014 and it is a perfect example of Play’n GO’s slots from that era. That was when they were more focused on quantity rather than quality. Don’t get me wrong, this slot isn’t bad, but it had potential to be great. The best way I can sum up Pearls of India is: ‘good, but not great’.

Pearls of India follows the same style as most of the other slots that Play’n GO released in the earlier half of 2010s. Everything is done in a 3D style that is aiming for realistic, but falling a bit short.

The biggest problem for me about the slots of this era is that they don’t have any personality. They all have a pretty generic style that doesn’t set them apart. The theme is well-executed, but it could have been so much better. Rich Wilde as a character is a good draw, but it isn’t until much later in the series that the slots start looking great.

The sound is more of a letdown than the graphics. The music can barely be heard under all the fanfares and coins clanking, and those get annoying quite fast. The soundscape doesn’t offer much and I muted the game after about two minutes.

The symbols can be categorised into two sets, the ones that fit the theme and the ones that don’t. This is one of those slots where the low-paying card symbols absolutely do not fit in. Indian temples and playing cards don’t mix.

The thematic symbols include the four high-paying artefacts and the three special symbols. Rich Wilde is the wild symbol, the pearl is the scatter and the temple is the bonus symbol.

This slot is all about chaining wins together. The game has a cascade mechanic with a growing multiplier, just like Gonzo’s Quest. A single win isn’t worth much, but five in a row on a single spin is. You need to be lucky to win big, but the medium volatility makes it easy to always get at least something.

I like that the slot rewards the player for playing longer. Normally, the longer you play, the more likely it is that the casino will win. Now they are at least giving the player a better chance.

Cascading Wins feature activates every single time you win anything. All of the winning symbols are removed from the reels and new symbols fall down to fill the empty spaces. Those new symbols can then create new combinations and the cascade continues.

With every win, you also increase your multiplier. The maximum is 10x and requires five cascades.

The mountain temples are the bonus symbols that activate the Bonus Game feature. Collect 25 temple symbols and you get to choose which of the three temples you want to visit.

Personally, I like this kind of bonus game. The slot rewards you for just playing on, even if you weren’t winning much. Just keep going and eventually you get it. Unfortunately, the prizes aren’t that great.

Grab some pearls and unlock their magic. Get at least three scatter symbols and you get 10 free spins. During those spins, the pearls are wilds and you also collect them for more prizes. For every five pearls you get, you gain five more spins and upgrade your cascade multipliers. The maximum you can get is 30 spins.

When you win anything, you can gamble your wins for even bigger wins. If you choose to gamble, you need to guess either the colour or the suit of a card. If you guess correctly, you double your money and if you guess the suit, you quadruple it.

What is especially good about the Gamble feature, is that you can use it on any wins. This includes anything you get from the Bonus Game feature.

Pearls of India was a big stepping stone for Play’n GO being an important part of the adventures of Rich Wilde and coming out during the rapid increase of their slot catalogue. Unfortunately, this slot was best served before 2015.

I’m not saying that this is a bad slot, but if you are going to play a Rich Wilde slot, then go for the newer ones. This slot is a curiosity that you might want to try, but don’t get your hopes up.

I liked playing this back when it came out, but I haven’t really wanted to go back and play it again since. I did try it again for this review and it just reinforced my decision. This was better when the entire gaming industry hadn’t come so far.

Play Pearls of India for free

Browse casinos with Pearls of India and other slots from Play'n GO. Create an account and try the game for free before making a deposit.

You can play Pearls of India in English, Finnish, Swedish, German and 30 other languages. 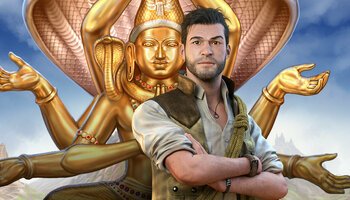