Persian Fortune is set in the mythical Persian lands during the stories of 1001 Nights, soaking us in a thrilling atmosphere and deep blue nights as we’re treated with beautiful sights and maybe some big wins.

This slot was released in 2016 by developer Red Tiger with a standard 5-reel, 3-row playing field and 20 betlines. So far, nothing new. The slot is set in Persia during the time of the most famous fairy tales. That means a lot of gold and blue colours, fitting symbols and a star-studded background of the night sky.

I thought the graphics were nice without being too impressive. It all looks gorgeous with the different high-paying symbols drawn in high detail and the background showing a beautiful night’s sky. Unfortunately, I felt like it lacked some heart, meaning that it all came across as very static and maybe even a little simple. Wins weren’t animated except for the exploding symbols and cascading reels.

The music was light on the Persian tones, giving off some vibes of the music we know from movies like Aladdin but never really committing either. Getting a bigger win did have a special type of jingle that slowly built as the win grew but it wasn’t often enough to feel like an actual part of the game.

The game has high- and low-paying symbols as you can find in most slots. The high-paying symbols fit the theme but don’t really stand out either. They’re all simple items which I feel would be better suited as low-paying symbols, with maybe some characters as high-value symbols. Instead, now the reels are filled with a lot of letters which takes away from the theme.

The game has a High Volatility which was evident while I was playing. When choosing a larger bet it would drain my funds very quickly but when I picked a smaller bet I actually saw it go up a little. This slot counts on you playing for a longer time to see any meaningful return on your investment. Players can pick a bet between £0.10 and £40 per spin which isn’t a very broad range compared to some other slots.

It’s been a while since I played a slot without a Free Spins mode but Persian Fortune is one of them. The game does offer plenty of other features that can possibly help in getting big wins.

Most of the game revolves around the cascading reels and this is also where you’ll generally get your wins from. The game spins as normal until there’s a win, at which point the symbols that are involved disappear and the remaining symbols drop down. This continues as long as it creates new wins this way.

An extra element of this feature is that there are 1 or 2 symbols on the playing field framed by a blue glow. These don’t do anything special unless they’re part of a win, in which case they will add a random Wild to the playing field. This would sometimes help in new wins while I was playing. The best times would be when a Colossal Symbol had a blue frame and was part of a win since it would add the same number of Wilds as the number of spots it took up.

In the case of a 2x2 Colossal Symbol, this would mean an additional 4 Wilds. If there was a 3x3 Symbol, it would add a whopping 9 Wilds. These were the moments where it would create big wins, and remember that there was also a multiplier that increased every time a win was created.

The Bonus Game deserves special mention even though it only showed up once during my time playing. Getting 3 Bonus Symbols on the screen will trigger it, letting the player pick 1 of 3 flying carpets. Each hides a certain number of picks.

Next, you’re presented with 14 blind cards. You get to pick the number that you have unlocked, flipping one card after the other until you’re out of picks. With every card that’s flipped a coloured diamond is added to a tracker at the bottom. There are 4 multipliers, each requiring 3 diamonds to enable.

I only managed to get a single multiplier but it’s possible to get multiple multipliers. I imagine you will get all of them awarded and not just the biggest one. This can be a huge win but since it’s so rare for the bonus game to activate it fits the high volatility.

Persian Fortune is a good, pretty looking game which has a lot of interesting features without making the slot experience too confusing. Veteran players will be familiar with each of the features already while there is enough information to explain how they work in the game itself for newer players.

A max. win of 2,000x your bet is impressive but I never felt like I was getting close to winning it. The high volatility showed itself a lot with only a handful of times where I was rewarded with a big win during my time playing. I would recommend choosing smaller bets or you’ll see your funds melt away in only a few spins.

Players that are looking for a truly classic experience won’t have a great time with Persian Fortune since it has quite a few features that mess with the normal slot elements. People that enjoy more experimental games might find this a little light on the experiments but still a modern video slot.

Browse casinos with Persian Fortune and other slots from Red Tiger. Create an account and try the game for free before making a deposit.

You can play Persian Fortune in English, Finnish, Swedish, German and 18 other languages. 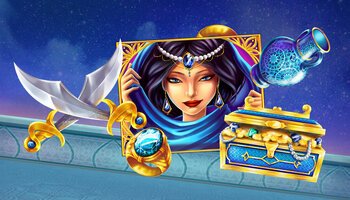