Pets Go Wild is a slot that forms when you combine a cool idea, a unique mechanic, great graphics and an original game experience. Don’t believe me? Then read on!

Pets Go Wild takes the idea of having your pets and bringing them to different exotic locations. Have you ever wondered what a cat would look like going to a film festival? How about taking your dog to the circus? The creators used this premise as a background to build a special 7x7 playing field slot.

The game deviates from most slots. The goal is to find three or more matching symbols together and click on them. This causes the blocks above them to drop down, hopefully allowing you to click on newly formed groups. The best comparison I can make is the popular mobile games Candy Crush and Bejeweled.

You won’t be dealing with paylines at all. Instead you are constantly looking for these groupings of the same symbols. This means that you’re actively playing the game. No clicking a Spin button over and over. Instead you’re going to be focused on the playing field on the hunt for the biggest group of symbols. With a maximum win of £130,000 you better keep your wits about you.

I’ll begin with the best part. The Pets Go Wild slot looks fantastic. The graphics are crisp and clear, with a distinct cartoon style and a lot of attention to detail. As you progress in the game you unlock different stages, each with their own images, background and details. Even the big wins have their own style for each stage.

There are plenty of animations to be found while you play, from little ones that make the grid come alive to the full animations when you get into the special features. As someone who grew up without the internet it still amazes me how much they can do nowadays.

The different stages are:

The music is good but it seems oddly chosen. While the game is very colourful and energetic the music is simple and muted. And while the different stages each have their own graphics and theme, the music stays the same the entire time. That’s too bad because they could have spiced it up a bit that way.

All the sound effects sound crisp and give you feedback whenever you do anything. Little blips sound when you click on a cluster of symbols and you hear a bell when you click on Play. I played with the sound on the entire time, which is pretty rare for me. Definitely consider that a commendation.

I think it’s time I delve into the game mechanics a little more and explain how this beautifully made game also gives you a unique playing experience.

I’ll look at the basics first. The game is built around five animals: a dog, a cat, a parrot, a goldfish and a rabbit. Each of them has its own tracker and each animal gives a different bonus. They all look different and I could easily recognize them from a quick glance which I really liked.

What is the tracker? While playing any stage you’ll see the five animals at the top of the screen. Each has six pips next to their portrait. Whenever you find a cluster of symbols associated with an animal and click on them, the number of blocks are counted as pips.

Let’s say you click on three green fish symbols placed together. That means the goldfish gets three pips next to its portrait. When you get six pips, you win a multiplier to your original bet. The pips reset and if you can keep playing, you can add more. This means that you could end up with more than one time the multiplier on your bet.

Depending on the animal, you get a bigger or smaller multiplier:

I know it sounds pretty complicated but the game does a good job explaining it. I also felt that it really added to the excitement of playing Pets Go Wild as you saw the multipliers you gathered before you got the final payout.

Of course, this doesn’t always happen. Every time the field doesn’t have any more moves, it sends you back to the main screen and the pips reset. As long as you can keep playing the same field, the higher the chances you’ll get enough pips for a multiplier. If you get stuck, it resets.

When you get sent back to the main screen you can choose to Play again, but if you played for a while and unlocked different stages you can also change between those. There aren’t any gameplay differences between each stage. Feel free to switch between the stages you like the most!

Finally let’s take a quick look at some of the bonus features. On each playing field you’ll find several bonus symbols. If you manage to click on a cluster underneath a bonus symbol, you activate it.

The possible symbols are:

I only hit these symbols occasionally because I had to get a cluster underneath them to activate them. However they definitely add something substantial to the game and I gave them priority trying to get them.

Pets Go Wild has a lot of things going for it and it is up to the player to decide if they like this experimental type of game or would rather go for something classic. Personally I enjoyed the high amount of details in the game as well as the more active approach to spins. I even felt like using some strategy facilitated bigger wins.

If you like a great looking slot that has unique features, then you should definitely give Pets Go Wild a chance. I think it has a lot to offer even though it might be too different from classic slots to appeal to everyone.

Browse casinos with Pets Go Wild and other slots from Skillzzgaming. Create an account and try the game for free before making a deposit.

You can play Pets Go Wild in English, Finnish, Swedish, German and 16 other languages. 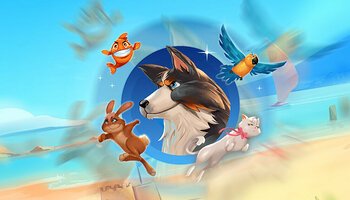