Phoenix Reborn takes us into the ancient heart of the jungle where we are exposed to brave warriors, dangerous animals and the mythical phoenix. Stacked Wilds and Free Spins are waiting for us.

This 2019 slot was developed and released by Play ‘n GO, offering players a 5-reel, 6-row playing field to play on with an impressive 40 bet lines. The game shows us a giant Mayan temple in the background which the reels aren’t really a part of but are just standing in front of. I did like how all the aspects of the game are made to fit the setting, down to the option buttons at the bottom of the screen.

Listening to the soundtrack we’re treated to an upbeat but jungle-sounding song which keeps the tempo of the game pretty well. It fades in and out as the game progresses, depending on any big wins or stacked wilds that appear. I thought it had a good quality but it wasn’t an earworm.

All of the symbols look beautiful in Phoenix Reborn, which is to be expected from a slot that is still so new. The high-paying symbols are animated when part of a win except for the Phoenix wild which always expands into a Stacked Wild, spreading its wings as it goes. It’s a very nice effect. There are also different character symbols that only appear stacked.

The symbols go from highest to lowest:

Although the coin wins per win line seem low, keep in mind that the playing field is larger than normal and that there are a lot of stacked symbols in the game. The Wild will always appear stacked and the two warriors are also always stacked. This means that it’s much more likely that any win will involve a number of paylines and not just one. To balance this out, Play ‘n GO has reduced the payout per win line as a result.

Another factor to keep in mind is that because this will make it harder to get any big wins, the slot has a High Volatility. This was in line with my experience playing it, as there was a steady trickle of smaller wins during my regular time playing this was barely enough to boost my funds. Instead, I was dependent on the occasional big win or free spins mode to see any increases.

Even though Phoenix Reborn is a newer slot the creators have opted not to go too hard on the features. There are a few but they are spaced out or don’t change the core gameplay too much. Classic players that don’t mind a larger playing field will probably get used to this slot rather quickly.

The Stacked Wilds play an important role in the game as they make it much more likely that you’ll get more than one win at a time. The Wilds show up pretty regularly, I would say about half the time, and when they do they expand to fill the reel. It’s also possible to get multiple Wilds on the screen at the same time but I found that to be a lot less likely.

I thought it was a very nice detail to the Stacked Wilds that they expand in a bright flash of flames that fit the phoenix idea. It also means that Stacked Wilds also fit the reel exactly. This in contrast to the Stacked Symbols which can stop at any place on the screen, sometimes only filling a single row. This makes them a lot less likely to be part of a win.

The Free Spins mode activated often enough to feel like a part of the game, but not so often it was dependable. There are 7 Free Spins to play with if you get 3 Scatters symbols on the screen at the same time. This can go up to 20 Free Spins if you have 5 Scatters on the screen. During this mode, it’s also possible to get additional free spins.

Since it has Stacked Wilds that appear every spin, it makes it more likely to get a win but it’s still not guaranteed. While I was playing, I found that the Free Spins mode often offered a nice amount of coins but not always enough to compensate for my previous spins.

Phoenix Reborn gives players the means to play a standard classic slot with some differences in its presentation, enjoying some extra features while still staying close to the normal slot gameplay. You will mostly spin the reels and get wins whenever there are 3 or more symbols on a win line. The additional features are really just extra, making the game stand out from the rest.

The graphics are spectacular even though I wish they had put some more time and effort into the background. This is more than made up for by the use of animations in all the symbols, especially the Stacked Wild. Players who enjoy something beautiful to look at while they play won’t be disappointed with this game.

The high volatility is a concern but the max. win of 5,000x your bet seems like a good incentive to try it anyway. It will require the stars to align somewhat for that to happen. All in all, I don’t think there will be many players who won’t get anything out of this slot!

Browse casinos with Phoenix Reborn and other slots from Play'n GO. Create an account and try the game for free before making a deposit.

You can play Phoenix Reborn in English, Finnish, Swedish, German and 30 other languages. 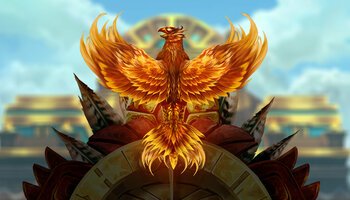