Phoenix Sun by Quickspin takes you to the Egyptian pyramids which are home to five reels, six rows and a maximum of 7,776 win-ways.

From the get-go, this setting has a lucrative potential. The winning outcomes can consist of more than five symbols and there is a supercharged Wild symbol that can help in that regard.

Winning combinations can land left to right on adjacent reels, regardless of the position. Working in perfect synchrony with this is the Wild symbol which can expand the reel set from the initial 3x5 layout.

Phoenix Sun has two extra features and they are intertwined. The Phoenix Wild is responsible for expanding the rows on the reel set and for triggering the free spins bonus. Even though these are the only features, they suffice to bring out the best dynamic from the ways to win payout system.

I enjoyed playing the game. Big wins can crop up both during the free spins bonus and in the base game. Virtually, the base game behaves like a bonus at times and this is why I think slot players will want to give Phoenix Sun a few dozen rounds.

Quickspin's graphic designers have succeeded in making a visually-pleasing game without going too heavy on the animation. The high-paying symbols are well-drawn depictions of Egyptian rulers and deities and the remainder consists of the royal cards plus the ten-card.

The sides of the reel set can help you follow the progress of the game. On the left are indicators for the number of wilds that have come into play and on the right is the current number of win-ways.

The tune is my favourite part of the design. It is an entrancing confluence of Middle Eastern string riffs, hypnotic drums and clashing gongs. You'll have no issue getting into the mood for this game, in no small part thanks to the music.

The game has two Wild symbols. One is standard and substitutes for all other symbols. The other is the Phoenix Wild, which can trigger the two features of Phoenix Sun.

Each Phoenix Wild that is part of a winning outcome can uncover three of the locked tiles above the 3x5 layout and trigger a respin. If another Phoenix Wild is added on the reel set and forms a win, the game brings into play three additional symbols. Every respin following a Wild win is marked by one phoenix token on the left side of the screen.

The game doesn't have a scatter/bonus symbols but can award eight free spins when you get five Phoenix Wilds on the meter. In the event, the prize remains and you get a chance at expanding that figure during the free spins bonus.

I think it's unfortunate that Phoenix Sun doesn't allow retriggers. Simply said, the Phoenix Wild is not part of the bonus feature.

Regardless of my last point, I find both the free spin bonus and the, practically, expanding Wild symbol to provide a good climax to a streak of multiple wins in a row.

I can see how you can inch closer to the max win potential of 1,716x your bet. Five winning outcomes consisting of multiple high-paying symbols and another good streak during the free spins should do the job.

The good thing about this bonus is that it can crop up without a long wait. Phoenix Sun is a medium volatility game that can make room for frequent surprises.

Quickspin makes it simple when it comes to selecting your bet. Simply choose one of the amounts that range between 25p and £100.00. With bets starting at £0.25 the game isn't that cheap to try, but this, I think, reflects the decent payout potential which is in view of the features.

One of the details that I am not too happy about is the value structure of the low-paying symbols. All symbol combinations between the ten-card and ace can pay between 0.4x and 0.8x your bet.

You need to land six or more matching symbols in order to get 1x your bet or more on the return.

On the other hand, the picture symbols fare a lot better:

Chances are that you will get a winning outcome consisting of more than five symbols, but not on the 3x5 layout. For that, you'd need to get more than two wins in a row with the help of the Phoenix Wild symbol.

I find the game to be both engaging and potentially rewarding. Regardless of the uninspiring value structure of the symbols, big wins can be made, however, not in the base game.

How exciting the gameplay gets depends solely on the Phoenix Wild. If the game is eager to reward you with more of these symbols, the odds of uncovering the full 7,776 win-ways are within reach.

Browse casinos with Phoenix Sun and other slots from Quickspin. Create an account and try the game for free before making a deposit.

You can play Phoenix Sun in English, Finnish, Swedish, German and 23 other languages. 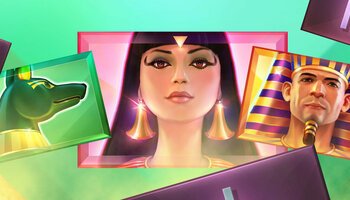