Sometimes an online slot comes along that oozes a particular charm – Be it the tranquil music in the background or the manner of how the reels come to a halt. In my case, Red Tiger’s slot game Phoenix does just that.

Its cool and calm exterior along with the soothing hues of the symbols and reels make for relaxing gameplay.

Set in a traditional Chinese setting, the Phoenix promises excellent fortune. You will be enthralled by magic and mystery, boosted by free spins and various multipliers as they are emitted by the magical crystal.

You shouldn’t confuse this offering with games Phoenix Fire and Phoenix Rising by the same maker though. This is a game stripped to its basics.

Spread over five reels and four rows, this game comes packed with 40 paylines but with an RTP of 96.29% and being a highly volatile game; it might be more alluring to a certain type of player.

Along with sharp graphics and a stylish soundtrack, this game has the potential to keep you coming back for more. But again, what will low rollers make of this game?

Like most Red Tiger games, the graphics have been excellently executed. I readily embarked on a one-of-a-kind adventure through Asia, thanks to its traditional style, stunning graphics and classic characters.

The game’s story is a classic tale of the Phoenix as it is brought to life before your very eyes.

You are asked to join in on the journey and to chase this majestic creature as you play along.

The game is set against the backdrop of a quaint village, where anything can happen.

The minimalist graphics added a nice subtle touch to the game, which I welcomed graciously. Sometimes I just crave games that favour ambience over flashy in-your-face graphics.

Overall, the graphics together with the sound make for a beautiful game.

Don’t let my description of a subtle game throw you off. In fact, the symbols on offer here can cause tandem as you play along.

You can find magic crystals, cherry blossom trees, golden eggs and traditional Chinese icons ready to bestow upon you some wins.

The highest possible payout comes from the Wild symbol – Land five yin-yang icons on the reels to collect the jackpot.

Like most games, the Phoenix slot game features game playing card symbols which are the lowest-paying symbols.

You will also come across a fiery apply symbol, the feather and the cherry blossom tree which payout better than regular symbols.

The baby phoenix in the fire is by far, the best symbol out of the bunch (besides the wild), paying out a stunning 388x when you land 5 of a kind.

The yin-yang wilds play a pivotal role in making this game exciting by peppering the reels and boosting winning opportunities.

The game comes with packed with a few bonuses and features that turn this charming game into a rewarding one:

Although I especially loved the package of this game along with the bonus features, I was less than impressed with the high volatility. I found myself spinning countless times without any wins or simply making measly wins.

This, of course, drained my bankroll and made for substantially short gameplay.

It has the potential for entertainment and a huge fun factor, but unless you have big money to spend, this game could be a downer for low rollers.

Still, it comes with all relevant bonuses and features, which is a lot more than one can hope for in an industry rife with less than alluring games.

Browse casinos with Phoenix and other slots from Red Tiger. Create an account and try the game for free before making a deposit.

You can play Phoenix in English, Finnish, Swedish, German and 17 other languages. 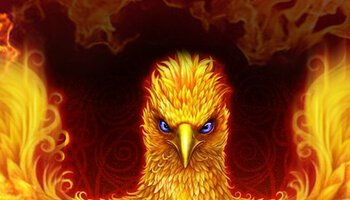