Have you heard the tale of the Pied Piper? No worries if you haven’t, because after playing this slot from Quickspin you’re sure to know at least the main plot of the famed children’s story.

Pied Piper of Hamelin is an old legend, originating from the 1300s. In 1284, a German town was festered with rats and the mayor hired a mysterious Pied Piper to fix the problem. The Piper enchanted the rats by playing his pipe and lured the rats to a lake where they drowned. However, the mayor was reluctant to pay the agreed reward. Angry for being deceived, the Piper plays his pipe once again and enchants every child in the town. He then vanishes inside a mountain, along with the children.

Of course, the slot version isn’t quite as dark as the original tale. For one, the rats have been replaced with cute, white mice. Also, the Piper is presented as a happy and cheery character. So, the story has been rewritten as a more family-friendly experience - a new idea for a Disney animation, perhaps?

Pied Piper is a fun and relaxed slot with medium volatility. The winnings from the slot are more moderate than heavy, so players looking for maximum thrills can get a bit bored. But, for casual players and newbies, Pied Piper is an excellent choice.

Pied Piper is an energetic and vibrant game which really does remind me of some magical world of Disney. The bright colours, a touch of magic and the presence of the royal family could indeed be a setting of a full-blown animated movie.

The music also fits the medieval theme. Sometimes a flute or a pipe can be heard, adding playfulness and reminding that the Piper is also hiding nearby.

I very much like the graphics as well as the sound of the slot, but overall the graphics can make the game run quite slowly. This frustrated me and often made me tap my fingers impatiently, as the Piper made his way across the reels.

Pied Piper has five reels, four rows and a total of 40 paylines going from left to right. The winning combinations are always formed starting from the first reel on left.

The game has both re-spins and free spins features. The stacked Pied Piper activates the re-spins if it lands on the reels fully visible, and three bonus symbols start 10 free spins. The re-spins can also be triggered during the free spins which may result in some great winnings.

When the Pied Piper lands on the reels 3, 4 or 5 as a fully visible character it triggers the re-spin feature.

During the re-spins, the Piper walks one step to the left on each spin and attracts all of the landing mice wilds to follow him.

It’s possible to re-trigger the re-spins if the Pied Piper steps back in the reels from the right side after disappearing to the left.

When the bonus symbols land on reels 2, 3 and 4 you get 10 free spins. At the start of each spin, the game randomly adds 1-6 mice on the reels.

The Pied Piper can appear in the free spins, too. If he does land fully visible on the reels, he activates the re-spins just like in the base game.

Playing Pied Piper was a pleasant experience, even if I occasionally got a tad tired of the lengthy animations and the slow speed of the reels. Luckily, the newer slots from Quickspin feel much better optimised and run more swiftly.

The re-spins and the free spins bring a lot of fun excitement. With some good luck, the Pied Piper can visit the reels several times and keep re-triggering the spins as well as attracting the small mice wilds to follow him.

The balance in the game feels pretty okay, as I managed to trigger either free spins or re-spins on a steady basis. In general, the winnings aren’t that magical as the game itself, but good enough to keep things interesting.

Browse casinos with Pied Piper and other slots from Quickspin. Create an account and try the game for free before making a deposit.

You can play Pied Piper in English, Finnish, Swedish, German and 23 other languages. 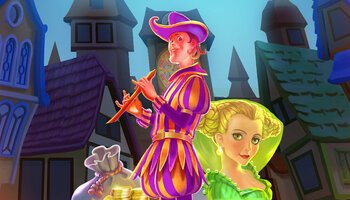