Forget the old bedtime stories - the pigs have set sailing and started a new life as pirates! Piggy Pirates is a slot game released in 2018 by Red Tiger and it takes us straight to the crossfire of pirate pigs and pirate wolves.

The pigs have located a treasure in a faraway island and are almost at their destination when they notice another ship closing in. It’s the fearsome pirate wolves and they’re not about to let the pigs get to the treasure first! The battle is on and it’s up to you whether the pigs reach the island and get their trotters on the gold coins.

Piggy Pirates is a medium volatile slot with a maximum win of 2,000x your bet. The game has a possibility to trigger unlimited free spins but in my experience, it’s highly unlikely to get to play more than 10-15 spins.

I love the cute design of the pigs and the colourful palette of the game. It’s all very cartoony, but without being overly so. The game takes us sailing the Caribbean and in the distance lies a small island, which happens to be our final destination. The sun is shining, the sky is clear and seagulls are screaming at our approach.

The game reels are placed in between two ships - the left belonging to the pigs, and the right to the wolves. Besides the start of the game, where a wolf drops a bomb into the water, there’s very little happening on the ships. It would be fun to see a random character on either of the vessels, even just walking around. I think Red Tiger missed a good opportunity to add just a tad more of humour in this slot.

Apart from the time when spinning the reels and Bonus pigs walking around, there’s no background music. Just ocean noises and seagulls, which is kinda relaxing. The music is shanty-like tunes and sadly way too repetitive, so I ended up muting the game sounds pretty quick.

Piggy Pirates has six reels, four rows and 40 fixed paylines going from left to right. At the end of each spin, the game shows the winning lines by drawing a dashed line over them - like in treasure maps!

The paytable of the slot lists explains the payouts a bit awkwardly. The first number indicates how many symbols are needed, then the number on the right side of the equal sign is the multiplier for your wager per payline. With the minimum bet of 10p, the total bet with 40 paylines is 0.0025p.

So, with the minimum bet, the six treasure chests on a single payline would pay £2.50.

A piggy bonus symbol can land on any reel. After stopping in its place, it walks towards either of the outermost reels at the beginning of each following spin. When they reach the edge, they fall off. By collecting three piggies on the reels the game activates the free spins.

The piggies can also get tired from walking, so they might take a short nap and stay where they are - giving you more time to gather enough pigs.

During the free spins, every Wild coin is collected by the pirate pigs for later use.

The free spins end when a wolf comes to spoil the party. After this, one last free spin is granted and all of the collected Wild coins are added to the reels as sticky symbols.

Even though I like the visual design of Piggy Pirates, I can’t say I enjoyed playing the game as much as I had hoped. The winnings were way too small-scale and it took me a good while to trigger the free spins.

I got to play around 7 or 8 free spins until the wolf ending the spins landed on the reels. The final spin was nice, but even the winnings from it weren’t enough to get me back to the original balance. So, the spins were nowhere near worth the effort in my case.

However, the gameplay is well done, the game looks nice and it’s very beginner-friendly. I just wish it would be more rewarding to actually play it and that it would have more features.

Browse casinos with Piggy Pirates and other slots from Red Tiger. Create an account and try the game for free before making a deposit.

You can play Piggy Pirates in English, Finnish, Swedish, German and 18 other languages. 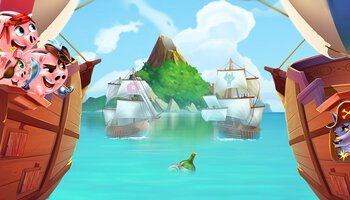