The filthy-rich pigs are at it again. Piggy Riches got the Megaways treatment and is now better and crazier than ever.

Piggy Riches is a NetEnt classic that was released all the way back in 2012. It has been a casino staple, but time has not been so kind to it. Red Tiger, in conjunction with NetEnt, developed an updated and improved version of the slot, Piggy Riches Megaways.

Piggy Riches Megaways takes the base game from the original and adds the Megaways mechanic into the mix. Now you have reels with ever-changing amounts of symbols and up to 117,649 paylines. The developers turned the risk factor up a notch and now we are dealing with a high-volatility slot that can blow your socks off.

Megaways is a mechanic developed by Big Time Gaming and they have since started to license it to other developers. Red Tiger has been using it on NetEnt’s classic slots with great results. Even Gonzo has had his slot updated and turned into Gonzo’s Quest Megaways.

Lavish luxury, insane riches and opulence beyond belief; that is what Piggy Riches Megaways is all about. The piggies live in a world, where banknotes are used for blowing your nose, a Rolls Royce is your second car and only Jeff Bezos is rich enough to be worth their time.

Surprisingly though, the Megaways version is a tad more subtle than the original. The frames around the reels aren’t so ornate as they were and huge wads of cash don’t line the screen.

One thing that also got a makeover was the user interface. Say goodbye to the classic NetEnt grey box at the bottom of the screen and say hi to sleek mobile-friendly buttons. Red Tiger streamlined the controls and made them as unobstructive as possible. It is better, but I think they went a bit too far with it. Finding things like the rules of the game or the paytable isn’t that intuitive.

This is also the first time that the piggies got music. It isn’t much though and can barely be heard under all the reel noises and the fanfares. This game will make it absolutely clear that you won anything. It will get a bit annoying when you win 2x your wager and get a massive fanfare like it was something huge.

The massive wealth of the piggies can be seen in the symbols as well. There are ten regular symbols and two special ones, and all of them scream ‘rich’.

For the high-paying symbols, we have huge amounts of cash in three different sizes, credit cards and car keys for your luxury sedan. The low-paying symbols are card symbols from ten to ace. These ones are coated with mahogany, gold, jewels and even fur.

Mr. Pig is the massive Mega Wild that will always fill the entire reel and have a multiplier attached to it. A single wild can have a multiplier as high as 7x and you can get up to three wilds with one spin. Those multipliers are then multiplied together, so two 3x wilds will give you 9x wins.

The always fashionable and glamorous Mrs. Pig is the scatter symbol. She will activate the free spins if you manage to get three of her symbols on the reels at once. This is harder than it seems. The Free Spin feature might be the best thing in the game, but it activates too rarely.

The game features the Megaways mechanic, which changes the game up. With every spin, you get a different amount of symbols on each reel and the number of paylines changes. This also means that the slot’s volatility has been pushed way up. Be careful with this one. The slot can suck up all your money in a heartbeat, but there is a chance that it will spit out everything it has with just one spin.

Megaways is an interesting mechanic that adds variety to the game. Every reel can have up to seven symbols on it and the amount of paylines adjusts accordingly. All sizes are worth the same, so you want to have as many as possible.

Mrs. Pig is a glamorous host and will occasionally pop up and offer you free spins. Mrs. Pig is a scatter symbol and if you get at least three of them at any one point, you activate the Free Spin feature. First, you get to spin a wheel and see how many free spins you get and what is your starting multiplier.

Every win you get will increase your multiplier by one. The multiplier will continue to rise all throughout the feature. You can get even more spins by hitting the scatter symbols. Each of them will award you with one extra spin.

Oh my, what a slot. This is a wild ride from start to finish. I don’t remember when was the last time I played a slot that was this much of a roller-coaster. It is not a joke when they say this game has a high volatility.

This is a perfect example of an all-or-nothing type of a game. The risk is high, but so is the reward. You either hit it big or lose everything before you can get there. There is no middle ground here.

I like what Red Tiger is doing to the classic NetEnt slots. The games they have been updating have all been needing a fresh coat of paint. Piggy Riches, for example, was looking a bit old and tired and the Megaways treatment livened it up.

When the mood hits me, I play this and other Megaways games knowing full well what I’m getting myself into. It is thrilling to play these and hope that you get those free spins and hit those big multipliers.

All I have to say about this, is that the slot is good, but boy, is it risky.

Browse casinos with Piggy Riches MegaWays™ - Red Tiger & NetEnt and other slots from Red Tiger. Create an account and try the game for free before making a deposit. 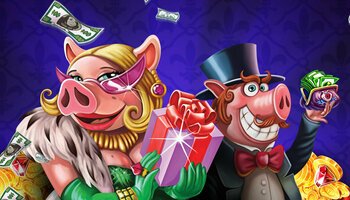