Pimped takes a rather contentious topic and tries to turn it into a slot. Surrounded by bling, money and women we’re given the opportunity to try and make it big in the city.

I think this game was quite a risk for developer Play ‘n GO when they released it in 2015. There might not be a lot of people that give the setting much thought. Considering the theme of the slot, it did feel rather icky to play a game set around the topic of sexual exploitation of women. The game does it’s best to steer away from any unfortunate implications but the name alone gives a clear notion of what the setting is supposed to be based around.

That said, players that are offended by the idea should skip the rest of the review as this game won’t find a lot they’ll find redeemable. For everyone else, I’ll move on to the actual details of the slot. The game looks great, with very sharp images all set in a distinct style. The background gives us the impression we’re high up in a penthouse with a grand view of a major city.

The symbols are rather innocent except for the two scantily clad ladies. The low-paying symbols are based on card letters but they’re all made to look plated in diamonds. There aren’t a lot of animations in the game, just some simple flashes and slight enlarging whenever a symbol is part of a win line. It all fills the 5-reel, 3-row playing field which has a modest 10 paylines.

As can be expected, the music also fits the theme. There is a thumping bass track accompany a wordless rap song that plays the whole time. Whenever there’s a win or a special feature the game plays a few simple sound-effects.

While the symbols in Pimped are large and detailed, I didn’t think they were particularly interesting. That’s not even to do with the questionable topic or the lack of animations but more on the fact they’re mostly variations on ‘money’. The characters look generic and make some additional unfortunate implications. All in all, the gaudy platinum-coated, diamond-studded low-paying symbols better represent the slot in having bad taste than being about wealth.

The game has a High Volatility which mostly seems to come from the low occurrence of the special features, leaving the basic gameplay to trigger any wins most of the time. These are usually not very large and thus don’t amount to a lot of coins. In my experience, I saw a steady but inevitable decline in my funds. The few wins I did get were often not enough to make back even the coins for a few spins. There is a max. win of 10,000x your bet to look out for so it’s definitely a high-risk, high-reward slot.

Even though the graphics for Pimped look very good and the music is also fitting, keeping the slot looking brand-new, there are precious few features to keep the gameplay interesting. The only features present in the game are:

The Wilds show up often enough to feel like a part of the game but aren’t helpful enough to really make a difference. Often these Wilds appear on reels 3, 4 or 5 which requires a lot of work from the regular symbols to create a win.

Another unfortunate choice with the game is that the Wild is a fist with brass knuckles, and when it’s part of a win it plays a punching animation. Considering the topic of the slot, this has yet more uncomfortable implications.

The Free Spins mode triggered very rarely and even when they did they felt like they offered no impact on the gameplay. There are no additional wins or other features that are activated during this mode, and you start with only 5 free spins regardless of how many Scatter Symbols you get on the screen.

It is possible to trigger additional free spins during the free spins mode, but even then the total amount can’t go over 20. Again, this makes this feature feel very inconsequential and almost pointless.

The features take a very basic approach that ultimately seems to represent the entire feeling of the slot: fake, lazy and quite offensive to people that give it a second thought.

As you could probably tell, I wasn’t a fan of this slot. Even ignoring the poorly chosen theme and the very unfortunate choices made during the design phase the game isn’t even fun to play. There are only two very basic features that hardly impact the slot, and the high volatility makes it only interesting to those few players that think they have a realistic chance at the jackpot.

If you don’t care about the theme you might want to give it a try since it does look good, even as it is getting older. Be aware that it probably won’t appeal to many players even then. Classic slot players will probably be annoyed by the unnecessary flash while modern players are going to clamour for some meaningful features.

Browse casinos with Pimped and other slots from Play'n GO. Create an account and try the game for free before making a deposit.

You can play Pimped in English, Finnish, Swedish, German and 30 other languages. 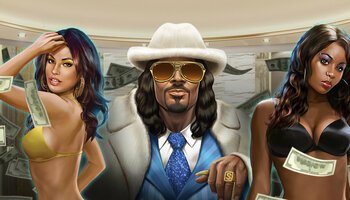