Pirate Booty puts us on a ship filled with rowdy pirates and sets us off into the wild unknown, looking for booty to plunder and adventure to find!

Created by Booming Games and released in 2019, Pirate Booty puts us in the boots of a pirate captain who sails his ship and his crew across the ocean looking for the biggest prize they can get their hooks and hands on. With its 5-reel, 3-row playing field and 20 paylines the game stays close to the classic experience but implements some special features to set itself apart.

The game reminded me of its sister slot Gold Vein, also created by Booming Games and released in the same year. The art style is almost identical, even though the theme is different, and there are other similarities in the gameplay. It might be because it’s a small team which means the same people work on different slots, or it might be a limited set of ideas? It’s too early to tell.

With its pirate theme, Pirate Booty isn’t exactly breaking new grounds. NetEnt released Ghost Pirates way back in 2009 and it’s been a popular setting ever since. That’s why there isn’t much to say about this slot that hasn’t been said before. It looks alright, I don’t personally like the art style but it’s passable. The background shows us on the deck of a pirate ship while the free spins mode drops us on a tropical island.

The music is good albeit uninspired. It reminded me of the popular Pirates of the Caribbean movies with a swelling orchestra song building in intensity. I found it to fit the theme perfectly but it was pretty blatant in where it got its inspiration from.

The different symbols look sufficiently unique to quickly tell them apart. When the high-paying symbols are part of a payline they show a little animation which was a nice addition. The low-paying symbols only grow slightly when they’re part of a win.

Pirate Booty is light on the features but they do offer some variation. The listed Medium Volatility didn’t really fit my experience. For me, the wins were rather few and far between. I also didn’t think they were particularly big enough to compensate for my spins. The free spins would often help a lot in getting some returns though.

Apart from the Cornered Pirates feature, I found the features to be rather bland. The Stacked Wilds don’t appear often at all, and when they appeared on reel 4 or 5 it made them practically useless. During Free Spins mode any Wilds appearing on reel 3 would make them sticky but that would almost never happen.

All in all, the features were there, they would show up occasionally and they wouldn’t do much before they went away. The idea was nice but the implementation could use some work. That’s not to say the features were very sparse. I did see them show up enough to feel like they were part of the game. A feature showing up and not helping in getting a win isn’t much of a feature, however.

The only fun addition was the Cornered Pirates feature, which required each or any of the 4 characters to appear in the 4 corners of the playing field. When this happened the game would reward me a 7x my bet win, as well as play a quick unique animation of the 4 characters shooting their weapon. It was incredibly rare but still a nice enough addition for the game to set itself apart.

All in all, the features don’t really save Pirate Booty from itself. They are competent, popular and can, in theory, result in some big wins but in my experience they rarely ever did.

Pirate Booty seems part of the course for Booming Games. The graphical style of the slot resembles their other games with its low-effort art and short, looping animations. The music is competent but rather derivative of other media. The features are largely unoriginal but so ingrained in the slot universe I can’t fault them for including them.

There’s only a few small twinkles of originality in this game. The Cornered Pirates feature was probably the biggest one, and it only showed up a handful of times in my time playing. There could be some real innovation in the future but they’re not there yet.

I wouldn’t call Pirate Booty a bad slot though. It does what it does well enough to satisfy most players’ needs. If you’re looking for something simple and basic that spins the reels for you and lets you know when you made a win, this game will fit that bill perfectly. It won’t compete with the bigger slots by the major developers but I can’t fault it for that either.

With the ability to choose a bet between £0.20 and £200 per spin there’s plenty of room to pick something you’re comfortable with. The max. win of 641x your bet is disappointing but again, this fits Booming Games’ style!

Browse casinos with Pirate Booty and other slots from Booming Games. Create an account and try the game for free before making a deposit.

You can play Pirate Booty in English, Finnish, Swedish, German and 23 other languages. 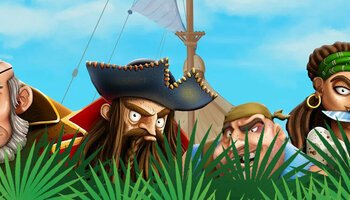