Pirate From the East slot review

Play Pirate From the East

Pirate From The East puts us on a pirate ship that sails the Seven Seas, living the life of an outlaw who takes what they want and looks for treasure!

Released in 2019 by developer NetEnt, Pirate From The East is a marked step back from other, older slots. I found the graphics to be worse to what they’ve produced before, even years back. Most of the symbols are flatly drawn and not animated, while the 2 characters in the game look like they were drawn by someone with little experience.

With a standard 5-reel, 3-row playing field perhaps the developers wanted to go back to a more classic appearance of the game, making us think back to the days of Ghost Pirates which was released in 2009. Pirate From The East has 15 paylines and Medium Volatility which makes it reasonably common for there to be wins.

The music was unfortunately about as disappointing as the visual elements, offering little more than simple jingles. There was no music to speak of during the base game at all, only the clicking of the spinning reels.

The symbols in the game are simple, with the low-paying card symbols being static letters while the high-paying symbols are drawings of random pirate items. There are 2 characters, a male and a female pirate, who can change up the gameplay somewhat.

When they’re part of a win, the high-paying symbols do a slight animation with specifically the characters moving around a bit. Still, for a slot that came out in 2019, it was all very barebones in my opinion.

The features in Pirate From The East are rather simple as well, although they didn’t need to be complicated to add something to the game!

Just as with the rest of the game there isn’t much to say about this part of the slot. The features are very rudimentary and behave as you would expect. I found the multiplier to wins with a Wild in it a welcome bonus but not much more.

The only real thing I would comment on is the choice you get to make once you trigger the Free Spins Mode. The Scatters that appeared on the screen show you different variations between the number of free spins you receive and the multiplier applied to all wins.

Personally, I found this to be an entertaining choice to make, giving me some agency in deciding how the game plays itself. For the rest of my time playing, I found myself very much just sitting and watching. With so little features, most of the game takes place in the base game.

Pirate From The East is a strange slot. It does almost nothing special, it stands out only in its mediocrity and it doesn’t even offer a particularly engaging gameplay experience. I would expect this from one of the smallest developers who have little time and means to create high-end slots, but NetEnt has established itself for years as a big name in the video slot development field.

So I’m left to wonder what happened. Maybe this slot was created by a team of interns, maybe the deadline was too short or maybe the quality was less important than the fact it was released. I don’t know, but in the end, we’re left with a very simple slot that doesn’t really belong in the NetEnt library.

The game offers all the familiar options a modern slot has, including quick spin and autoplay. Players can choose a bet between £0.15 and £75 per spin. The only real positive I can name for this game is the max. win of 24,000x your bet, which is certainly one of the biggest ones for NetEnt slots.

I don’t know who to recommend this game to. Perhaps players that enjoy the basic slot experience with the minimum number of features will get a kick out of Pirate From The East, but beyond that group, I can’t imagine there will be many people that will be enamoured by the game.

Play Pirate From the East for free

Browse casinos with Pirate From the East and other slots from NetEnt. Create an account and try the game for free before making a deposit.

You can play Pirate From the East in English, Finnish, Swedish, German and 20 other languages. 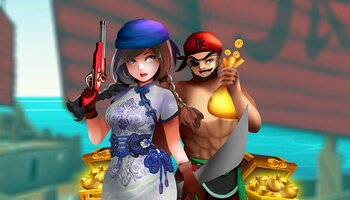