Pirate’s Charm sets sail onto the Seven Seas to explore, plunder and hopefully retire with big piles of gold! At least, that’s what the pirates want. We’re just along for the ride.

This slot has a 5-reel, 3-row playing field with an impressive 243 paylines, meaning that any symbols on consecutive reels will trigger a win. The Quickspin game, released in 2018, is set at a pirate port in the dim light of the morning sun. I wish the playing field didn’t almost completely cover the drawing as it is a great way of setting the mood.

The different symbols are nicely drawn, with even the low-paying card letters decorated with barnacles and seaweed to give it an appropriate feel. I wish there were some more animations to give the slot some movement. The characters were the highlight for me, especially considering they have a slight manga twist to their art-style. The colour scheme keeps them sufficiently different, although it was a bit disappointing to see that the two male pirates both have a moustache and goatee. I would have thought there was some more variety in pirates!

If you were expecting typical pirate music to accompany the setting, you would be half-correct in guessing the music Pirate’s Charm has. I found it to give off Pirates of the Caribbean vibes it did have an original sound, going from very much in the background and subtle to be more bombastic and dominant. Wins especially were celebrated with almost an orchestra worth of instruments.

The symbols in Pirate’s Charm can be divided between high- and low-paying symbols. Where the high-paying symbols are characters and pirate items, the low-paying symbols are based on cards. I suppose pirates were known to play cards during their time onboard so it’s not completely outside of the setting but I still wish the creators had injected some more originality into these tiles. I can’t deny it all looks good though, with wooden boards behind the letters to give the impression they’re part of the ship.

If you’re worried about the low coin wins per symbol, you should know that the game has a listed High Volatility. During my time playing, getting wins was not extremely difficult but the low coin value meant it was unlikely to help much in increasing my funds. However, the abundance of special Mystery Charm symbols did help facilitate some infrequent big wins. This meant that over a longer time playing I found my funds to grow somewhat.

Pirate’s Charm is rather light on the number of features it uses, but the Mystery Charm symbol has several special functions that help keep the gameplay interesting. The features are:

Because the Mystery Charms have a bunch of different functionalities, I’ll list them in a separate list:

Because the Mystery Charms are such an important aspect of the game, a lot of time is spent observing them. I found them to be very common, often triggering re-spins because of it. This also helps explain the high volatility and the low coin value of wins, since there are frequent wins and re-spins that don’t cost the player a bet.

In general, I found the gameplay to be quite entertaining. I had to look up the paytable to see exactly how the Mystery Charms work though since they have so many functions and they aren’t quite explained well enough. The re-spins triggered very often while the free spins were rather rare. I also didn’t see the Mystery Spin feature activate a lot.

Pirate’s Charm is a nice slot for people that enjoy a classic slot experience that’s been spiced up with a feature that comes in a lot of different shapes and sizes. One size does not fit all, however, and I can imagine that players who prefer more classic slots to become annoyed by the distracting features.

The game looks excellent which I’ve come to expect from Quickspin. Their games always have a nice setting and a number of beautiful symbols. I wish there had been some more animations because the only real movement in a spin is the Mystery Charm. Still, it looks lively and realistic.

If you’re looking for a big jackpot, Pirate’s Charm doesn’t quite deliver. The max. win of 1,431x your bet isn’t especially low but there are other slots that offer a bigger incentive. Though, during my time playing, I found that the size of the bigger wins was enough to keep me playing.

Browse casinos with Pirate’s Charm and other slots from Quickspin. Create an account and try the game for free before making a deposit.

You can play Pirate’s Charm in English, Finnish, Swedish, German and 23 other languages. 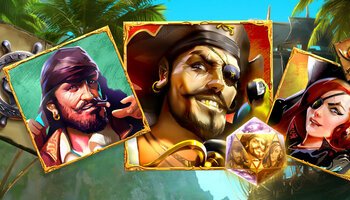