Pirates’ Plenty Slot Review Evoking memories of Pirates of the Caribbean, Red Tiger Gaming’s Pirates’ Plenty is an intense, yet toe-curling online slot with (as you have probably presumed) a pirate theme.

I hear ye shout, “Shiver me timbers” as you sail the seven seas in search of treasure. Along with a rather unsettling skeletal pirate captain, the main aim of the game is for you to hunt down and bring back wins of up to 5,000x your bet. This vibrant coloured slot game enjoys dynamic graphics and superb animation.

At first glance, I thought this was yet another slot game with a pirate theme, but once I noticed the map on the side, this slot game did not disappoint. The game itself creates a nice and cosy atmosphere if you can see the irony of that statement. Since the game is set in the belly of a galleon with two oil lamps swinging and lighting the way, it is almost romantic, when you forget the theme.

Needless to say, this game reaps lots of treasures, including the free spins mode and the background changes that give the game a sense of progressive movement. You will occasionally find yourself facing a crew of pirates with the marching soundtrack creating a tense yet almost anxiety-inducing atmosphere as you spin the reels.

Of course, I was playing this game with the aim of having fun and winning a few bobs, but I found myself biting my nails a little bit.

Built over five reels and with 20 pay lines, there is an extra sixth reel that acts as the treasure map.

Symbols on the reels feature all icons that you have come to expect from a pirate-themed slot. These include golden coins with gems in the shape of playing card suits, a bottle of booze, muskets, a cannon, a captain’s hat and a skull. The skill is, by far, the most rewarding out of all symbols rewarding you with 50x your bet if you land six of a kind on the reels.

The treasure map symbol also has a pivotal part to play. You collect these map symbols, in order to progress onto the Treasure Reel. Once you reach your destination, the sixth reel will remain activated as long as you keep on betting the same amount.

That’s not all; the Wild Ships feature is also activated at this point. You’ll spot ships in a bottle that can cover entire reels and transform them into wilds. Add multipliers of up to 5x on top, and you have the perfect recipe for success.

There is also the chance of triggering the Wild Monkey feature during the base game. Whenever the monkey’s ship plays a part towards forming a winning combo, the monkey will leap from reel to reel, gathering all low-paying symbols. You are also granted a re-spin, with only high-paying symbols landing on a guaranteed winning pay line.

The free spins round is activated by landing three Ocean Spins scatters. To start with, you gain ten free spins, with the ship captain landing on the reels frequently. When he does crop up, you are provided with the key to one of the locks on the treasure chests on top. This feature alone bewildered me.

With my heart pulsing, I kept my fingers crossed as I landed more keys. Once I unlocked a chest, by getting three of these keys, I gained additional spins and one low-value symbol transformed into a wild. I only succeeded in unlocking one treasure chest as I played along. However, if you keep unlocking more treasure chests, you are bestowed with extra wilds and the winning potential here is enormous.

With an RTP of 96.12%, the variance of this slot game is quite high. Unlocking big wins will be far and wide. However, you can expect to open the Mystery Reel of free spins with ease. With a maximum of 2,000x the stake per spin, and landing a 5x multiplier, everything is possible.

I was unable to trigger this humongous sum, but that did not deter me from this game. If you don’t pin your hopes up too much on big wins, there is plenty to enjoy.

I found that when that elusive sixth reel opens, the video slot picks up momentum, thanks to stacked wilds with multipliers. Without this reel, it is tough to reach big wins, and you won’t come anywhere close to big prizes.

If you prefer to play slot games with a pirate theme, you might also want to check out Red Lady by Novomatic or Pirate’s Charm by Quickspin. It is either the time to walk the plank or to go hunt for treasures.

In general, I found that the pirate-themed slot game is fun and entertaining thanks to their boisterous features to collect treasures. This slot game from Red Tiger Gaming promises this and much more. It is superbly designed, and the elements will kick up gameplay up a notch to your delight.

Even though we saw some of these features in other slot games by the same provider, it still offered a different scenery and found it immensely pleasurable as you can gather from the ratings.

Browse casinos with Pirates' Plenty and other slots from Red Tiger. Create an account and try the game for free before making a deposit.

You can play Pirates' Plenty in English, Finnish, Swedish, German and 18 other languages. 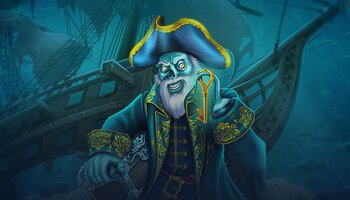