Planet of the Apes slot review

Play Planet of the Apes

Planet of the Apes is based on the reimagining of the famous movies, showing the rise of sentient apes and the fall of mankind in this apocalyptic slot!

If you’re not familiar with Planet of the Apes, it started with a movie series in the 70s detailing the spacefarer who lands on a planet where instead of humans, apes are in charge. In the 21st century, the series was rebooted with 3 movies, 2 of which are the inspiration behind this slot!

Planet of the Apes was created by Netent and released in 2017 before the third movie came out. It borrows heavily from these movies, using actual scenes, the different characters and I believe even the soundtrack is based on them. As a big fan of the movies, I was pleased to see this slot back in the day and I think it still holds up now!

The big draw of this slot for me was the fact they are basically two separate slots combined into one. While we play with a 10-reel, 3-row playing field, they operate as two 5-reel, 3-row slots. Only a few of the features are connected across the two sides. The total slot has 40 paylines.

The slot was created with help from 20th Century Fox, the owners of the franchise. It means that the entire game is filled with images and animations drawn directly from the movies. If you haven’t seen the movies yet I’d recommend that you do because the slot gives quite a bit of the story away!

The game looks good as can be expected from Netent, but there isn’t a lot of original art. The high-paying symbols are just portraits of the characters in the movies. The lower-paying symbols are unique but based on playing cards so they’re not as original. It does all look great though so if you’re the type of player that likes to look at pretty images while they play, you can’t go wrong with Planet of the Apes.

The soundtrack is suitably ominous and dark, fitting the theme of the movies. It plays continuously and immediately puts us in the right mood.

The symbols in Planet of the Apes are distinct and look good, but are mostly based on the movies. If you haven’t seen them, they won’t make much sense. Some of them, particularly the apes, can be animated if they’re part of a special feature. Most of the time though they are static.

As you can see there’s quite a collection of symbols. The special features usually only affect one side of the slot. For example, if you get 3 free spins symbols on the Rise part of the screen, it will trigger the Rise Free Spins mode. To get the Dawn Free Spins mode, it requires 3 free spins symbols on the Dawn part of the screen.

Since it’s a Netent slot and basically 2 slots combined, you can expect a waterfall of features. I’ll list them here and explain the most prominent ones:

As you can see that’s a lot of features. If you are the type of player that enjoys a calm, ‘classic’ slot experience I would not suggest this game to you. Not that the features are that hard to get your head around, but there are so many of them it’s hard to know what to focus on.

I found the most interesting feature simply the Free Spins. This was the part of the slot where I felt I got a good shot at winning big. With a Low Volatility and a max. win of 1,200x your bet this still isn’t as high as some other slots but I found it to be quite a big amount. Choosing between £0.20 and £200 per spin means you can also decide how much risk you want to take.

I wouldn’t say you can ignore the other features but they all appear randomly so it’s just a matter of playing and seeing them appear. They all have the possibility of turning out very lucrative but in my experience, that didn’t really happen. Instead, just enjoy the graphics when they do show up and keep playing as you usually do!

Planet of the Apes by Netent is a fun, respectable adaptation of 2 great movies into a slot. There are loads of features to enjoy, the graphics are good and the soundtrack does a good job keeping me in the mood.

If I had to criticise it on anything it’d be the quite overwhelming amount of features and the lack of personality. Even though it uses loads of videos and movie images it didn’t really feel connected to the overall game experience. The movie is simply placed on top of the slot instead of being integrated. I think they could have done some fun things with that if they had tried.

Even though the game is several years old it still keeps up with newer games. It all looks fantastic. The different features are sufficiently able to spice up the base gameplay without it being too confusing. Most of the features just randomly appear and you only have to let it do its thing. I thought that was a good compromise.

Even if you’re not a fan of the movies I think there’s plenty of enjoyment to get out of Planet of the Apes. Just watch the movies though, you’re missing out!

Play Planet of the Apes for free

Browse casinos with Planet of the Apes and other slots from NetEnt. Create an account and try the game for free before making a deposit.

You can play Planet of the Apes in English, Finnish, Swedish, German and 20 other languages.

Planet of the Apes supports GBP, EUR, SEK, NOK and 33 other currencies. 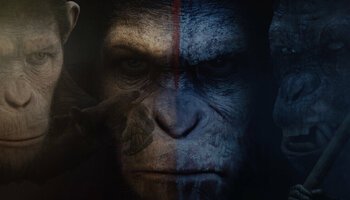