Pop is a slot that is set at a carnival on the promenade where we see the familiar sights in the background as we play this game. It not only features a 4-reel, 4-row playing field but also includes cascading reels, free spins and wilds.

Developed by Big Time Gaming and released in 2021, Pop has some odd choices embedded in it. The graphics look outdated even when it’s one of the newest games in their library, with the art style reminding me of classic fruit machines and the first video slots to ever appear. It must have been a deliberate choice but I can’t immediately understand why. The slot features a combination of card letters and balloons that each react differently.

The slot has a total of 256 paylines thanks to the consecutive reels mechanic, but there are some odd choices here as well that make the game feel less forgiving. Even after only playing for a few minutes I already felt the influence of its High Volatility. Players who enjoy a modern slot with some interesting features but prefer the style and presentation of older games will likely appreciate what the studio has done here.

Even the sound design has been using classic music extensively, which confirms to me that the designers deliberately went for this type of design. The game has a very carnival sounding song playing during the base game with some standard jingles mixed through whenever there’s a win. It’s nothing special but it emphasises the stylistic choices.

It all looks rather flat and uninspired, with their main purpose seems to give the player a clear indication of what is going to help grant a win and what is not. In that sense, I think it was a good choice to give it this appearance but it doesn’t make it very appealing to the eye.

The slot’s high volatility comes into play often, with regular wins already rather tricky and bigger wins seemingly impossible. The game does have the possibility to augment your bet to between £0.20 and £20 per spin which might seem like a limited choice. Do keep in mind though that the slot offers a massive max. win of 66,960x your bet which is much higher than most slots offer.

With such a large number of symbols, a smaller playing field and extremely low payouts it shouldn’t be a surprise why this game has high volatility. Players will really have to depend on the features to activate in the right way to net any bigger wins.

Pop doesn’t include a lot of features in its gameplay but the ones that are there have a big impact on the outcome of every spin. To start with, a quick overview:

The base gameplay involves the reels spinning as normal. Players will be mostly paying attention to the balloons as they are the ones that most often trigger a win. In fact, it seems like Wilds only work on card letters after the first win. Whenever any symbols are part of a win they will be replaced by either balloons, wilds or Scatter symbols.

The entire idea behind this type of gameplay is that the wins get progressively bigger and that the possibility of getting the free spins mode to activate also becomes more likely. Unfortunately, this means you will spend most of your time watching how you get either no wins at all or very small one-time wins.

In fact, during my time playing, I only managed to activate the free spins mode once and that was also the biggest win I got the entire time playing. That’s not to say my funds dropped very quickly but do not expect any regular wins to push you into the positives.

Pop is a game that takes some very interesting choices and runs with them. The look of the slot is intentionally made to seem like it has been around for decades even though it is brand new. Meanwhile, the features bring a unique combination to life with familiar and more modern elements.

Players who either don’t mind the look or prefer something more classical looking will likely enjoy Pop. The high volatility is definitely an element that people should keep in mind though, as getting big wins is not easy. Once it does happen, they are likely to give your funds quite a boost.

On the other hand, if you’re a player that enjoys a steady stream of wins or a modern-looking slot this game is probably not for you. The slot clearly focuses on a very distinct part of the player base.

Browse casinos with Pop and other slots from Big Time Gaming. Create an account and try the game for free before making a deposit.

You can play Pop in English, Swedish 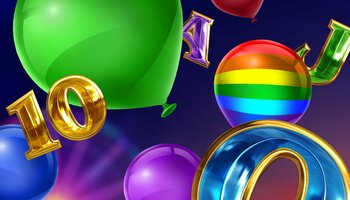