Pork Knox brings the player along as there is an attempt to break into the famous gold storage in America. The video slot includes a lot of different pigs as well as some interesting features. Besides free spins and Wilds, the game also comes with a progressive jackpot.

The game was developed and released by NetEnt in 2021, showing off what they are focusing on now. I thought this slot was an excellent callback to the time they invested a lot of time and effort into the presentation. The graphics are crisp and animated, with a cartoon style to give it some originality. Players will likely understand what’s happening on the screen even without the title giving it away.

All of the gameplay is centred around a standard 5-reel, 3-row playing field with 20 paylines. In the background, we can see the massive building we’re trying to break into, which changes when we activate the free spins mode. A minor complaint is that the background has no noticeable animations at all, making it just a static image. It doesn’t detract from the experience but it’s still too bad.

Pork Knox has a lot of creative room when it comes to the premise of this slot. This meant that I expected the reels to be filled with some original symbols. Unfortunately, this was not to be. Even though all the different symbols look great and have a cartoony feel to them, they don’t do much new. The high-paying symbols are all things you would expect, like piles of gold coins, the piggy bank, gold bars, a clip of dollar bills, etc.

Meanwhile, the low-paying symbols are the usual card suits. They also don’t really fit the narrative of the game. All in all, this results in the symbols feeling very disconnected to the game. As I said before, the association is simply not there. It’s not that a video slot needs to have a compelling story but to make it stand apart, it would help.

Players that choose to spin the reels in this game are dealing with Medium Volatility. It’s something that’s becoming less common nowadays, with most slots leaning towards higher volatility. In this slot, it means that you’ll likely get a rather steady number of wins but they won’t always be high enough to make back your bet. The RTP of 96.02% is actually quite low when compared to other games.

Obviously, it’s possible to deal with this volatility a little bit. Players can do this by changing their bets. The slot allows people to pick a bet between £0.20 and £100 per spin. As an incentive to keep playing, the maximum jackpot is a reasonable 1,000x your bet. This is a bit lower than average for a game with this volatility.

Pork Knox has a number of features that help spice up the gameplay in different ways. None of them I would consider to be especially original or rare, but that doesn’t matter. What really counts is how they work together. In that respect, I was pretty pleased with the way they are implemented.

First, a quick overview of the features that you’ll find in this game:

The game will likely play similar to other slots. The one that most closely resembled it was in my opinion Vegas Night Life, from the same developer. There are some changes to the basic gameplay loop. If you’re a fan of that game, you’ll find more of the same here.

The jackpot is obviously the most interesting since it’s progressive. This means it continues growing as players play the game. If you’re looking to win the maximum static amount, you will have to bet the highest amount and pick the right Scatter symbol when it appears.

I thought that the bonus game was a nice addition to the game since it is wildly different from the rest of the slot. That said, I found it very hard to get into it. The scatter symbols are quite rare and the ability to pick the right one that holds the bonus game makes it even harder. Even then, it’s possible that this mode ends after a mere 3 spins.

Pork Knox is a bit of a confusing slot. It has a nice visual style and a funny name, but I felt like it didn’t maximize its potential. Instead, besides offering some funny graphics and a few animations it didn’t really offer anything special.

This is not to say it’s a terrible slot. For players that don’t care about the visuals, there is still plenty to enjoy. The scatter symbols hide 3 different features that reward the player in different ways. In my experience, it was the coin win that was the most lucrative although you are better off increasing your bet in that case.

The bonus game was a clever addition but as I noted before it was hard to activate. The few times I did manage to trigger it did result in some nice wins though. If you’re someone with the funds to afford it, I would recommend this game.

Browse casinos with Pork Knox and other slots from NetEnt. Create an account and try the game for free before making a deposit.

You can play Pork Knox in English, Finnish, Swedish, German and 20 other languages. 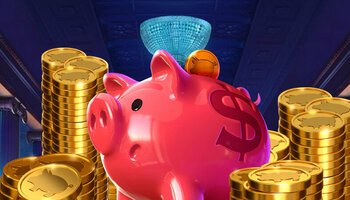