A group of friends can change the world if they decide to, but that would require bazookas, steel armours, a hideout filled with gadgets and superpowers.

I wanted to do that with my friends once, but I was missing all of the above, so I just stuck to playing Power Force Villains. Maybe a big win could buy me a laser, something to begin my cape-wearing career with because there are two progressive jackpots that can result in potentially huge wins.

Even though Power Force Heroes bears some semblance to a light-hearted superhero comic book, I was able to look beyond the drawings and into some of the fact-of-the-matter details. For starters, Push Gaming has decked the game out with a set of high-flying features. Players who are looking for the thrill of scoring winning outcomes at a higher frequency will likely find a golden middle with this game.

I got the feeling that the variance is dead-set on medium. Winning combinations can crop up on more than one payline from a single bet while stacking wilds can link up high-paying symbols. The base-game can be as engaging as the free spins bonus because it can land stacks of matching symbols.

There are a couple of tidbits about Power Force Heroes that I found to be not so spectacular because there is no such thing as a perfect slot game, but I am going to save that for the last.

Push Gaming has done this game properly, with attention to every detail. The reel set is located inside an airborne craft that is hovering above a city that's in a dear need of superheroes.

As I was playing I had the impression that the designers have been following a primer written for producers of Hollywood superhero movie blockbusters as every type of a character is represented on the paytable.

There is the Iron Man-like guy, a sporty guy who peddles fireballs, the cool nerd who has a way with gadgets, the danger-girl who's crafty with villain-busting weapons and there is the so-called Speed hero represented by an athletic girl.

Sadly, the cool superhero drawings and the background weren't complemented by any animated details, which tends to become overbearing if you are planning to return to the game again. Some 200 spins deep and I felt like the graphics could have been a lot better.

The sound design will underwhelm you. It beats my wits as to why a progressive jackpot slot has been left without a musical theme. The droning sound coming from your refrigerator can sound more sci-fi than the sound effects in this game, so again, sound-wise this is one floppy shabby superhero.

And here is the not so spectacular part about Power Force Heroes. The paytable’s been watered down so much so that winning outcomes in the base game are hardly worth counting.

The royal cards pay the same amounts for each symbol - 0.8x for three of a kind, 0.2x for four of a kind and 0.4x your bet for five matching symbols. Multiple payline wins are frequent in the base game, but they rarely amount to an amount that is greater than your bet, when the royal cards are in question.

The high-paying symbols are just slightly better when the winning outcomes are comprised of three and four matching symbols between 0.4x and 2.8x your bet. Wins for five symbols can pay between 1x and 8x. The above brings me to my conclusion that this is the kind of a slot game that you play for the bonus feature, and for the slim chance of winning one of the progressive jackpots. Conclusion

I enjoyed playing Power Force Heroes. I like what Push Gaming has done with the math model because you do get to feel the thrill of landing frequent winning outcomes, but these can barely rake-in a significant amount, even when the wilds are stacked on one or more reels.

On the other hand, the Super Spins feature redeems the pale contrast of the base game, in terms of potential payouts. The colossal symbols make a thud on the middle three reels on every spin and connect with their matching counterpart on the flanks - to a decent to great monetary effect.

Much to my dismay, regardless of how ecstatic the bonus feature can turn out to be, the game is not too generous with it. So those players who want to hobnob with comic book superheroes and play a progressive jackpot game should take this into consideration.

Browse casinos with Power Force Heroes and other slots from Push Gaming. Create an account and try the game for free before making a deposit.

You can play Power Force Heroes in English, Finnish, Swedish, German and 16 other languages. 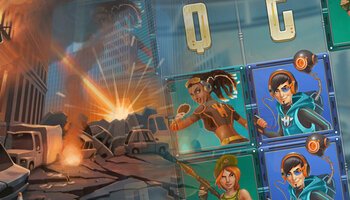