Power Force Villains is like the edgy, avant-garde and reckless brother compared to his near-identical twin, Power Force Heroes, who is upright, proper and always well-meaning. I'd discovered the 'Villains' edition of the progressive jackpot slot not by accident. It was right there in the online casino lobby, sitting next to the 'Heroes' edition. I had to try it and just compare it to its twin and I ended up staying for a lot longer.

Sure, superheroes are cool, dramatic and are either born with or come to acquire some kind of a superpower. Compare that to villains, who are beset by a grand agenda. Whereas superheroes want to save the world, villains want to control it and build all sorts of rayguns or galaxy-busting hypernovas made of rare earth minerals. It doesn't compare. Sadly, I guess, supervillains have a lot more to offer in terms of theatrics.

That's exactly what we get in the Power Force Villains, plus the features and progressive jackpots of Power Force Heroes. The gameplay and features are identical as is the paytable, for the most part. I think I had pinned the variance successfully to medium for the other game and I am super-convinced that the present game has been furnished with the same math model.

So what does it all come down to in the end? Potato-patato? Yes, almost. Let's name the comparison potato-batato, because a sweet vegetable of that name can be found on the green market. And it's good.

Push Gaming takes us inside the villains' lair where they're assembled at the oval table planning their next move on the superheroes. I must admit that this game has greater appeal in terms of graphic design. I don't know if it is the dim inside of the hideout (the background) or the wacky villains, but it is probably both that provide an edgier look and feel to the game.

The high-paying symbols are, of course, the villains and these are represented by a burlesque cast of characters: leprechaun with mechanical spider legs, an elderly schoolmaster lady with a plasma gun, a prankster clown who is wielding a mallet and a couple of other personas that belong to the dark side of science (fiction).

I am again disappointed by the lack of a musical theme. Anything with deep piano chords and awe-inspiring trombone stabs would have fit the gameplay so well, but no, Push Gaming has decided to let the villains to battle without an accompanying theme for the final showdown.

The game comes with two progressive jackpots - Force and Power, represented, respectively, by a silver and gold coin. Either one can trigger if three corresponding symbols land anywhere on the reels, however, the Force jackpot can be won only in the base game and the Power jackpot, which is a lot more lucrative, can be won only in the bonus feature.

You can play Power Force Villains with bets that start at 25p per spin and end at a maximum of £100. As for the payout structure, this game's paytable looks just slightly better compared to the 'Heroes' edition, but that comes with a caveat.

Obviously, none of these symbols can return the full bet and the same is true for three of the five high-paying symbols. 1x your bet is paid in full for four of the spider leprechaun symbols. The Fire villain's symbol pays between 0.4x and 6x and the Strong villain can pay between 0.4x and 10x your bet, which is the same as the wild symbol.

The paytable structure is disappointing but I am the least surprised because this is a progressive jackpot slot and there is the extra feature which can offset the small payouts by way of guaranteeing a colossal 3x3 symbol on every spin. Unlike Power Force Heroes, the Villains edition doesn’t post wild symbol stacks on multiple reels, so the low-paying payouts can rarely amount to winnings that are greater than the bet. On the other hand, the medium variance had me surprised more often than I expected thanks to the ‘walls’ of matching symbols.

I think I’ve made about the same number of spins on both games and I’ve noticed that the math model is more inclined to posting the bonus feature colossal symbol on Power Force Villains compared to its twin. But, in the few times that I’ve had the feature trigger, it never did so with a fully-showing 3x3 symbol, which means a greater number of spins.

Overall, I think that the game is definitely fun to play, despite the lack of animated symbols. The math model makes the gameplay fun and unpredictable because we are not facing a high variance logic. Also, consider the two progressive jackpots which can make this game a more thrilling experience compared to an online slot that doesn’t have one.

Browse casinos with Power Force Villains and other slots from Push Gaming. Create an account and try the game for free before making a deposit.

You can play Power Force Villains in English, Finnish, Swedish, German and 16 other languages. 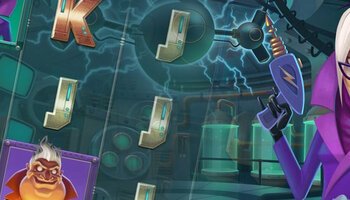