Machines are revolting and all of human life is on the line. Battle it out with 90s retro graphics and a ton of features.

Mancala Gaming released Power of Guns and its sister slot, Power of Guns Dice, in May of 2020. The game got my attention with its interesting visual style and a great selection of innovative features.

At the time of writing this review, Mancala Gaming is a fairly new developer with only six months since their first release. They have already released a large number of slots, but most of them are clones of each other. For example, if you are not interested in how Power of Guns looks like, then you might like Pirate Cave or Odin’s Fate, which are both the exact same game.

If you compare Power of Guns to other developers’ games, it is innovative and original, even though you can find the same set of features in other slots by Mancala. At first, I thought of this as just a way to pad out the numbers, but that might not be the case. If you think of these slots like different skins over the same core, then it’s just a question of user preference. You get the same game but with an exterior that suits you.

I like old games, so I went with the retro-styled pixel art version, which is Power of Guns. So now I just need to gear up and join the battle.

Humanity is fighting for its survival against an uprising army of machines. This sci-fi slot takes a lot of influence from video games and especially those from the mid-90s. It even took its entire visual style from them and went with pixel-art graphics.

The retro graphics work wonders here. The game is very distinct with clear and colourful symbols. Each of them looks like they could be an item or a power-up in some old computer game. The backgrounds are lively and the animated combatants look amazing. Mancala nailed the retro-look.

The sound effects and music are also perfect. Power of Guns sounds just like an old video game, but there is a little mixing issue. The sound effects can drown out the music if you play fast enough. The sound of the reels spinning and the victory fanfares are a bit too loud and can’t be turned down separately from the music.

All the symbols are done with the same great pixel art style as the rest of the game. The symbols are easy to tell apart and fit the theme well. There are a total of 13 symbols: 5 low-tier card numbers, 4 high-tier picture symbols and 4 special symbols.

The game is full of special features and each of them has its own symbol. First one is the wild, which is just a regular wild symbol. The second is the radar, which activates the Wheel of Fortune feature. The third special symbol is the question mark, which is for the Find the Card feature. The last one is a jigsaw piece, which unlocks a new part of the Assemble the Jigsaw bonus game.

The best part about these special symbols is the fact that you only need one of them. A single symbol activates that bonus game and it doesn’t even matter where it lands.

Power of Guns has very low volatility, which is easy to see when you look at the pay structure of each symbol. They are perfectly linear and it’s not that hard to win more than your bet back. This is also a bit easier as the paylines work both ways.

That being said, the game does require you to take some risks. If you just play the base game, you end up slowly losing your money. You need to activate and use those special features to get bigger wins. The Wheel of Fortune is the safe option and the Find the Card is riskier. Take your pick, but you are going to need to use them.

Power of Guns has some powerful paylines. You can win on them from left to right and vice versa. Each payline can only have one win, so if there would be multiple at the same time, only the highest paying wins.

Wheel of Fortune is activated if the radar symbol lands on the reels. Wins from that spin are taken as your base amount and you get to spin for extra multipliers.

The wheel has multiple tiers and each is riskier than the one before it. You start from the outer edge and can work your way inwards. There are three types of symbols: numbers, crosses and arrows. A number is simply a multiplier, an arrow will take you to the next level and a cross will end your game and you lose everything.

You can spin as many times as you want or just take your winning and leave. You start off with 1x wins and can increase that number up to 50x.

The question mark symbol activates the Find the Card -feature, which also can increase your wins from that spin. Now you just need to choose a symbol and then find it.

All symbols here are equal and each of them has four copies on the 4x4 grid. You start off with 1x multiplier and every correct symbol you find increases it. The first hit takes it to 4x, second to 20x and third to 100x. If you pick a wrong card, you lose it all. You can stop at any point, even before you even start choosing cards.

The chances of winning are 25% for the first pick, 20% for the second and roughly 14% for the last pick.

Every jigsaw piece you find on the reels is added to your own jigsaw. You need to find 10 pieces and when you do, you win 10 free spins.

Unfortunately, you can’t see how many pieces you have collected, unless you get a new piece.

Power of Guns got my attention with its visuals and got me hooked with its features. I spent a good while playing this and enjoyed it. The game has a lot of good in it, but not everything is perfect.

One of the first things you notice is that the game does have a lot of features, but I had a really hard time activating them. The Find the Card feature was activating constantly, but it took me some 500 spins to see the Wheel of Fortune for the first time. This is a big issue. It doesn’t matter how many features your game has if a player can never get to them.

The other noteworthy thing that I found surprising, was the pay structure. Not so much what the symbols were worth, but more the balance between volatility and risk. I was expecting a lot less risk for a slot that has very low volatility, but to get ahead, you need to take big risks. Especially in the Find the Card feature, which can be worth a fortune.

Apart from those, the rest of the game was good. The game handled well, even if I would have preferred a bit faster gameplay. The visuals, the mechanics and the balance were all done well.

Mancala Gaming started out with a nice selection of games and Power of Guns is a great game for such an early title. It shows that the developers have a lot of interesting ideas for mechanics and themes. I’m looking forward to seeing what kind of games they will release next.

You can play Power of Guns in English, Swedish, Spanish, Italian and 4 other languages. 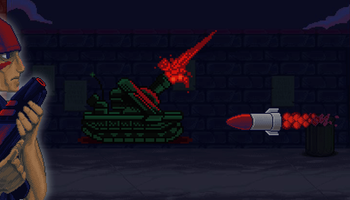