Tap into your primaeval instinct with Betsoft’s Primal Hunt. This slot will take you back to the last ice age where you will play on a 5-reel, 4-column grid with 80 paylines.

Here you will be on the hunt for the mysterious cave lion. A ferocious beast ready to pounce on its prey. Catch the lion and you will enter a bonus round full of free spins and multiplying multipliers.

The symbols are nothing to write home about. Whilst they are well-designed they feel flat and uninteresting. Even the cave lion symbol (which by itself is gorgeous) feels inauthentic. Rather than a cave lion, it looks more like the sabretooth tiger from the Ice Age movie franchise. Call me a purist, but more work (or at least research) should have been put into such an important symbol.

Apart from these, there are also another 4 low-paying symbols which take the form of boney card suits. Five-of-a-kind of the Ace, King and Queen yield 0.5x whilst the Jack yields 0.4x.

During gameplay, 3 or more scatters (hunting cave lion) will trigger the bonus round. The amount of free spins is decided according to the number of scatters on the grip. With 3 scatters you will receive 8 spins, 4 will give 12 spins and 5 will yield an amazing 20 extra spins. These scatters also come with a payout of 8x, 16x, or 96x for the respective amount of tiles.

During the bonus round the normal wild is mega-sized and will multiply by either 2x or 3x. But that’s not all, these multipliers multiply! For example, get three 3x tiles and any wins are multiplied by 27 (3x3x3).

This can bring about some truly good wins as these wilds normally come stacked, and with the 80 paylines available, there are many combinations to be made.

Being a big fan of anything feline I was ready to love this game. Unfortunately, it left me more than disappointed even after landing on the fierce bonus round which first came with a win of 138x and then a win at 50x.

Wins during gameplay seem to be scarce. I was getting very few little wins hovering around the bet amount and then a few other wins around the 2x to 5x mark. Other than, not much happened.

Now, I generally don’t mind this but the problem I have is there are too many peppy FX going on within the game. Every other spin will have this climax of sounds which will result in a big fat nothing. You get a lot of wilds making an appearance but these only show up in the middle reels and more times than not there’s the bells and whistles of the wilds but no wins. During gameplay, a cave lion will also appear talking up 2, 3 or 4 columns. It looks stunning and there’s a sort of jig with the animation which catches your eye. But again, most of the time there’s no win.

Even with its medium to high volatility, this game is probably more suited to the more advanced slot players. Of course, with the 4,400x maximum win, there is a possibility for some great gains. However, also keep in mind the RTP of 96.10% which should tell you a thing or two about the slot engine. Excitement might be found in the darkest of caves but so is a ferocious long-toothed feline.

Browse casinos with Primal Hunt and other slots from Betsoft. Create an account and try the game for free before making a deposit.

You can play Primal Hunt in English, Finnish, Swedish, German and 19 other languages. 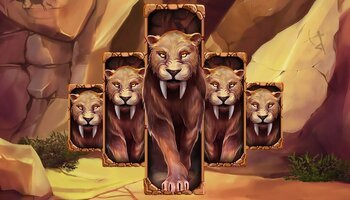