Prissy Princess has a snooty, beautiful princess as the main character in this slot that is set during the middle ages, inside a magical castle. The game boasts brave knights, dangerous dragons and of course the prissy princess herself.

This 2019 slot was released by Play ‘n GO and has some amazing animations and a whole slew of bonus games to keep it lively and interesting. The 5-reel, 3-row playing field is filled with items and characters that fit the setting well, surrounded by castle towers while in the background we catch glimpses of a medieval castle. The 20 paylines run from left to right like usual but there is a cascading reels feature that triggers occasionally.

There are plenty of animations in this game. The dragon picks its teeth when it becomes a Stacked Wild, while the dragon also makes frequent passes over the playing field to add random wilds. There is a bonus game which involves some simple animations that are unique to that part of the game.

If you were expecting a slot set in a magical castle to have music that sounds vaguely medieval, with violins and flutes, then you would be right. The sound is cheery and upbeat, reminding me of the type of music you’ll often hear in the traditional pubs in fantasy films and games. In that respect, the game does a good job of setting the mood and keeping to the theme.

The game already made a great impression on me with its look and feel, and it managed to hold on to it by only using original symbols to fill the reels. There is a distinct difference between the low- and high-paying ones but they’re not based on anything else. The high-paying symbols are different characters, subtly animated when part of a win. The low-paying symbols are simple items like armour and weapons. They stand apart because they’re not as colourful and aren’t animated.

It’s possible for the player to pick a bet between £0.20 and £100 per spin, which makes the risk per spin a little bigger or smaller. I found the game’s Medium Volatility to be close to my experience, where the wins were frequent but not very big, often being just enough to keep my funds steady but not much more.

Play ‘n GO seems to have made the decision to include more features in their newer games as this has been a noticeable trend in the last few years. Prissy Princess carries on this trend with quite a few important features that alter the gameplay in big ways. There is no free spins mode but instead, it has a special bonus game.

The features are mostly concentrated around the base game, with the wilds showing up in some capacity the most often. There are 2 types of Wilds, the Prissy Princess and the Dragon. The Dragon only appears as a Stacked Wild when a reel has all 3 knight characters on them. This didn’t happen extremely often but frequently enough to be interesting.

The random wilds were only added when there was no initial win. The dragon would fly across the screen and add up to 3 wilds on the screen. This would always enable at least 1 win but wouldn’t be a guarantee it would trigger additional wins.

I thought the cascading reels were a nice addition but don’t play as big of a part to the gameplay as you might expect. The reels only cascade when there is a win on them, and only the reels that were part of the win. So a three-of-a-kind reel will only cause reels 1, 2 and 3 to get new symbols.

When a player has 5 wins in a row, each time causing a cascade and then getting another win, the chest at the top of the screen is opened. When that happens, the game shows us a ticker that spins and stops at one option. This is a multiplier that is applied to the total coin win of that spin or the total bet staked.

The bonus game is triggered by getting the three banners of the knights to appear during a single spin, which is also kept track of at the top of the screen. The bonus game revolves around trying to impress the princess through 3 different trials. The player isn’t part of these trials but instead tries to pick the winner.

In the first round, the player picks 1 of 4 characters. The top 3 characters move on to the next round while number 4 is eliminated. In round 2, the top 2 are left over. In round 3, the player makes their last pick. If at any time the player picks the loser for that round the bonus game ends and returns to the base game. The player then receives the total coin win they managed to get up to that point.

I liked this bonus game, especially considering all the characters except the loser will receive a coin win. You aren’t required to always pick the winner to get something, even though it obviously makes the win larger. I also liked the animations that showed the event happening briefly before showing the results.

Prissy Princess is a nice slot with a great assortment of symbols, a lot of features and interesting additions. The bonus game was very entertaining. It might be a little overwhelming for players that enjoy a classic slot but most people will probably get a kick out of it.

The game has a max. win of 1,000x your bet which fits the medium volatility. It probably will take some time to get that jackpot though, as with the volatility it doesn’t hand out big wins very often.

The most notable criticism I can offer is that the princess plays only a tiny part of the game, not really relating to any of the features. I think it might have been fun to see her a bit more involved in the game, with the dragon stealing the spotlight instead.

Browse casinos with Prissy Princess and other slots from Play'n GO. Create an account and try the game for free before making a deposit.

You can play Prissy Princess in English, Finnish, Swedish, German and 30 other languages. 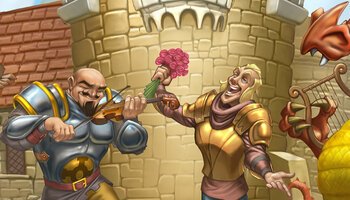