Prohibition takes us back to the time where the American government had deemed alcohol too dangerous to be allowed and it birthed the explosive rise of organised crime in the country. Now it’s time to see what’s up with wilds, a bonus game and free spins!

The game features a standard 5-reel, 3-row playing field that is populated with different characters and classic prohibition-era props. All of this designed and developed by Evoplay Entertainment, who released the game back in 2014. Unfortunately, this has also begun to show as the graphics are simply bad.

Everything is designed using 3D software but the textures are flat, the animations are stiff and all the items and characters look fake. I’m a big fan of hand-drawn art as this ages much slower, and Prohibition is a good example of what I mean. Even a game that’s only half a decade old by this point looks like it was released in the early days of the internet.

Prohibition shows us a big stage in what looks to be a club with an animated showgirl standing to the side. She sometimes applauds when there’s a win or blows a kiss at the player. Unfortunately, her movements are quite wooden and repetitive but I appreciate the effort.

The music is done a lot better however, playing a smooth jazz song in the background as the reels spin with a short trumpet stinger whenever there’s a win. The sound effects aren’t great as they were a little too harsh but it did capture the atmosphere well.

All the symbols in Prohibition are unique for this slot and made to fit the setting. Even though they look rather dated, I appreciated that they were all created specifically for the game. Whenever they’re part of one of the 20 paylines they’ll play a short animation too.

The different symbols pay out quite a lot compared to other Evoplay slots even though Prohibition is also a Low Volatility game. The number of wins here is quite steady but with only single paylines paying out at a time most of the time.

Prohibition has a number of special features including not one but two different bonus games. I thought that the implementation of all the elements was cleverly done and it never felt overwhelming. The bonus games and free spins mode also activate rather often so they did feel like a part of the slot and not something unobtainable.

The different features you can find in this slot are:

The two bonus games are very similar to each other even though they have different angles. Players are sent to a different location where they click on a number of objects until they run out of choices before receiving their total coin win.

The first bonus game sees us stand in a backyard and we’re tasked with shooting empty whiskey bottles. There are 5 bullets and 10 bottles. The game continues until all 5 bullets have been used, after which the player receives the total win. I found this bonus game to be quick and easy and there’s no real method of playing it correctly.

The second bonus game lets us take the role of the police as they stumble on a warehouse with stashed contraband. There are different places where the booze might be hidden and the player clicks on these hiding spots until the Collect prompt shows up. At this point, the bonus game ends and the player is awarded the total coin win.

This second game was a little more volatile as it was possible to immediately click Collect and have the game end prematurely. To compensate, the coin wins in this game were a bit higher than during the shooting game.

All the other elements of the game are standard fair, especially if you’re familiar with the Evoplay game library. The Free Spins mode grants you 20 free spins with the possibility of re-triggering them, and once your original spins run out you get to pick one of 3 bonus cards. These cards hide either a 2x multiplier, a 3x multiplier or another 20 free spins.

Prohibition, unfortunately, did not age well when it comes to the graphics, but the gameplay remains solid and I liked what they did with the setting. All the elements remind me of the prohibition era with the clear gangster vibes. There is no violence in the game, even though there are a few guns as well as the shooting bonus game.

Players that want to give it a try will have the opportunity to pick a bet between £0.20 and £200 per spin, with a max. win of 1,115x your bet as an incentive. I never felt like I was really winning enough to come out on top, although I eventually managed to have more coins that I started out with. Do be prepared for a long time playing to get to that point, if it happens at all.

Classic slot players might not appreciate a large number of features and modern players might dislike the aged graphics but I think that for the majority of players it is right on the line between offering dependable gameplay mixed with some innovative choices.

Browse casinos with Prohibition and other slots from Evoplay Entertainment. Create an account and try the game for free before making a deposit.

You can play Prohibition in English, Chinese 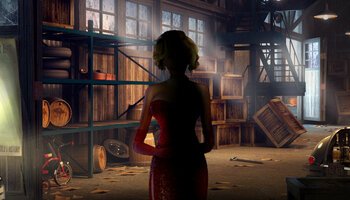