It may be lonely at the top of the Pyramid, but the views must be absolutely splendid. I wonder if a 3,600,000-coin max payout would mean much to an Egyptian pharaoh, but to us mortals, it can go a long way.

The full title of this NetEnt game is Pyramid: Quest for Immortality, which reflects the mysterious look and feel of the gameplay. You are surrounded by Anubis and Horus, whose religious cults are summoning all the cosmic energy they can so that they can unleash it in the win-multiplier meter.

Slots that have an Ancient Egypt theme never fail to impress me. I can’t get enough of the artwork, which usually makes wondrous renditions of Egyptian deities. Well, I can’t quite say the same about the Pyramid, which was made in 2015 and looks like it hasn’t aged that well. One look at Play’n GO’s Ankh of Anubis and you’ll know what I mean.

But let’s not get hung up on the graphics, because there is certainly more to this game. For one, it doesn’t come with a typical layout of 3x5. I mean, it has that, but there is an additional row of three reels and another one at the top that houses the tip of the pyramid.

Besides win multipliers, Pyramid: Quest for Immortality can also trigger an extra feature with the wild symbol. Both features are made possible as a result of the cascading wins payout system, which is always fun to play on, especially when it works itself up into a payout frenzy. In my experience with the game, that didn’t help to improve the impression, and I will get to that shortly.

Pyramid has some decent design features to it, but overall, I think NetEnt has dropped the ball on this game.

The way in which the tiles pile up reels and crumble has a nice effect to it that reminds me of Gonzo’s Quest. Another element that captures your attention is the glowing energy behind the four symbols at the top of the pyramid, which are crucial for the eventual big-win payouts. But despite this, I still think the symbols could have been made to appear more lively, so as to match the cascading wins dynamic.

Not all is lost about the gameplay. I feel that the cascading wins system does enough to make the game playable, but not for long. A Middle Eastern musical theme makes the ambience rich with sound and melody, but it’s too bad that you can’t turn off the sound effects and remove the loud thuds of the tiles in order to enjoy the music on its own.

NetEnt has decided not to include the usual free spins bonus in Pyramid, but the base game makes use of the avalanche wins and the wild symbols in order to create a condition for bigger wins.

The game makes payouts on concurrent reels and regardless of the symbols' row position. This constitutes the avalanche/cascading wins payout system, which comes with a caveat - symbol payouts tend to be low, which makes sense in view of the number of times you can make a gain from successive winning outcomes.

The most valuable symbol on the game is the pharaoh, paying 50 coins which amounts to 5x your bet for a win of five of a kind. For the same number of the queen symbols, the payout is 2.5x. The set royal cards and the ten are appallingly low - three of a kind can pay either 0.10x or 0.20x your bet.

Summary Beware the low to medium variance, as it sets serious obstacles on your journey up the Pyramid. Low variance slots are fine by me, but only when the payout system works with standard paylines.

Thankfully, the minimum bet on Pyramid is low enough (10p per spin) to enable players to try the game out for fun. This is one way to find out that the bet multipliers don’t come around too easily in this game, but when they do the winnings can pile up rather nicely.

Browse casinos with Pyramid and other slots from NetEnt. Create an account and try the game for free before making a deposit.

You can play Pyramid in English, Finnish, Swedish, German and 20 other languages. 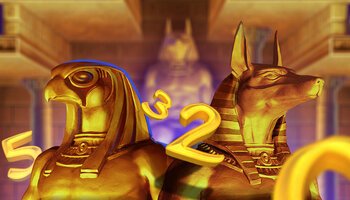