Pyro Pixie is a rather interesting slot that will bring the player into a mythical forest where some fire-happy pixies rule the roost. Players can enjoy some amazing graphics together with a bonus game, multiplier wilds and free spins.

This slot was developed by Kalama Games and released in 2019. It shows in the graphics which are crisp and detailed, with even some animations thrown in to boot. The 6-reel, 4-row playing field obscures part of the background, which shows us a dark forest during the free spins mode that might or might not have burnt down. It’s hard to say due to the night sky but we don’t see a lot of leaves on the branches.

In contrast, the symbols in the game are pretty bright. There are pixies and various other beings to make up the high-paying symbols while there are runes used to fill the low-paying symbols. When not in the free spins mode we can see that the forest is still rather lush, even though it is still covered in a night sky. Whenever there’s a win on one of the 40 bet lines there will be a brief animation and the total coin win is displayed on the screen.

The game can sometimes add multipliers to the screen, which will light up different tiles and add the multiplier underneath. Whenever that tile is part of a win, the multiplier will be applied to the entire win. All of this is done through a very noticeable appearance so that you aren’t surprised when it triggers.

Pyro Pixie is a very distinct name and luckily the developers decided to add an actual pyro pixie to the game. There is definitely a sense of fire playing a big part in the game, even if it isn’t exactly incorporated into the gameplay. Instead, you’ll be looking at a variety of graphics and animations that represent fire. The pyro pixie herself is the best example but there’s also the burning tree that acts as a scatter symbol.

When it comes to the gameplay, the slot offers players to change their bet to a number between £0.45 and £121.50 per spin. The sizes of the available bets are kind of weird, with values like £2.61 and £17.40. It’s based on the number of paylines, the Hyper Bet level, and the coin value of each but I feel like they could have made them a little tidier.

The slot has High Volatility which expresses itself not really through a low number of wins but rather that the wins usually aren’t very high. You’ll need quite a few paylines at the same time to get a sizable enough win that makes back a number of spins. The free spins mode does help in this regard but it’s not extremely easy to trigger. If you’re looking for a reason to give this slot a try, the max. win of 8,000x your bet will surely act as an incentive.

When it comes to the features in the game, they include:

Pyro Pixie makes some interesting choices when it comes to the features, introducing pretty standard elements you’ll see in a lot of slots but making them a bit too complicated for no real reason. First of all, a quick look at the different features:

Most of the game revolves around the base game, during which there is a continuous counter counting up to 10. Every spin, one or more tiles will light up with a multiplier underneath but not affect the game at all. Once the counter hits 10, these lit up tiles will be filled with Wilds and any wins that result from this will be paid out with the multiplier.

This is a pretty steady way of being quite sure of a win, although these tiles never appear on reel 1, meaning that there’s always the possibility it won’t result in a win. Even when it does, they aren’t guaranteed to be very big. Players can augment the size by increasing their Hyper Bet level which means the cost per spin goes up but they will also get higher multipliers.

Pyro Pixie is a nice idea with some interesting ways the developers have decided to visualise this idea. Unfortunately, the different elements in the game don’t really tie together all that well. I would have liked to have seen the Pyro Pixie have a bit more of an immediate impact, maybe causing the reels to catch fire with the wilds or some similar visual representation.

There’s nothing wrong with the gameplay on its own but they made it rather complicated and it took me a few times to read through the paytable to fully grasp how it worked. The Hyper Bet feature plays a huge role in the way the game works but it barely draws attention to itself.

Players that want more control about their funds will probably enjoy this feature, as well as the ability to activate the free spins mode whenever they want to. In my experience though, activating it is never going to pay itself back and it’s better to have it trigger organically.

Browse casinos with Pyro Pixie and other slots from Kalamba Games. Create an account and try the game for free before making a deposit.

You can play Pyro Pixie in English, Finnish, Swedish, German and 9 other languages. 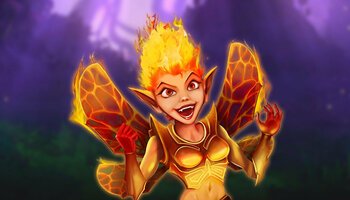