Queen of Riches takes inspiration from an unnamed queen that lived during Ancient Egyptian times, with the slot giving players a look at the extravagant wealth that these rulers used to have. The slot further includes expanding reels, Stacked Wilds and multipliers.

This slot was developed and released in 2016 by Big Time Gaming. You’ll quickly notice that even though the slot has 6 reels, the number of rows changes every spin. Any reel can have between 2 and 8 rows. As a result, each spin will also have a different number of possible paylines, ranging from 64 to 117,649 bet lines.

With its inspiration drawn from Ancient Egypt, most players will already know what to expect. The graphics look good but are not very inspired, with the low-paying symbols being simple card letters. The high-paying symbols look a little better as different hieroglyphs but again don’t show off much creativity. The background appears to be inside an Egyptian temple, helping us with the setting but again lacking in creativity.

When it comes to the sound, I had to turn it off pretty quickly. There is no real music to speak of, instead, a short tune plays with every spin. Depending on how fast the players spin, or if they use the Autoplay functionality, this tune just repeats over and over, and it got on my nerves very quickly.

Overall, Queen of Riches looks quite good which is surprising when comparing it to other slots this developer released in the same time period. Both StarQuest Megaways and Danger High Voltage were released only months apart and had comparatively terrible graphics.

That’s not to say that Queen of Riches should win any awards though, the card letters are still simple and there was no effort made to fit them into the Egyptian theme. Meanwhile, the other symbols are classic Egyptian hieroglyphs that we’ve seen hundreds of times before.

With the number of symbols and the potential number of bet lines, it’s no surprise the game comes down to Medium Volatility. The payout for a single win is very low but you can assume that a lot of times you’ll get multiple wins at the same time, which compensates for it somewhat.

Special mention to the massive max. win of 3,529,470x your bet if everything goes correctly, which is by far the biggest regular jackpot I’ve ever seen in a slot. With the possibility to bet between £0.20 and £10 per spin, this can be a life-changing win.

Queen of Riches doesn’t complicate things too much considering the already quite distracting expanding reels, where every reel can be a different size. To keep things manageable, there are only a few other features:

The expanding reels are the biggest part of the game and are their own thing that feels disconnected from the other features. Getting a win still feels uncomfortably difficult even considering the potentially thousands of paylines in a single spin.

The Mirrored Reels help somewhat in creating wins by appearing identical to each other. This will usually involve two reels but this can expand to include 3 or more. My biggest complaint here is that often the reels appear on the right side of the playing field, essentially making them useful in all but a few cases.

The Wilds are more useful but are pretty rare. They are always Stacked to fill the reel they appear on, and it is possible for more than one to appear at the same time, but it is still improbable. Every Wild can have a multiplier applied to them but in my experience, this was often only 1x my bet.

Queen of Riches is a capable slot released by a developer that in my mind is still very much a starting studio. Obviously, the game is now a few years old and we can assume their portfolio has begun to include more interesting and original slots. This, unfortunately, isn’t one of them.

It plays fine and actually looks quite capable compared to other games they released around the same time, but the Egypt theme is incredibly overused and the designers seemed to make no effort in having it stand out in any way. As a result, only those players that really enjoy the gameplay will remember this game.

Considering the enormous jackpot I am sure it will appeal to a lot of players who want to give it a try. The gameplay is pretty solid but the medium volatility might have been miscalculated. I found my funds to drop sharply the entire time I was playing and never felt like I was getting enough back to compensate for it.

Play Queen of Riches for free

Browse casinos with Queen of Riches and other slots from Big Time Gaming. Create an account and try the game for free before making a deposit.

You can play Queen of Riches in English, Swedish 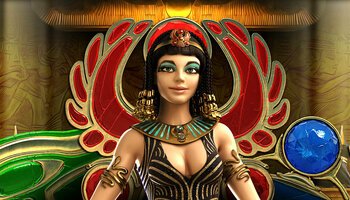