Queen of Wonderland Megaways brings the player to the mythical land of Wonderland, following in Alice’s footsteps as we explore this bizarre place. Besides the Megaways mechanic, players can also enjoy free spins, a bonus game as well as re-spins.

This slot was released in 2020 by developer iSoftbet, bringing this game onto the internet at the end of the year. The game revolves around the Megaways feature, which means that the 6 reels in the slot have a different size each spin, varying between 2 and 6 rows. Because of this, the game has between 64 and 117,649 paylines.

As far as the design goes, Queen of Wonderland Megaways is an amazing slot. It really dives into the setting of Alice in Wonderland, using a number of famous characters as well as a series of random other symbols that fit the setting. There are a lot of details related to the book as well as the different movies that were created. Players who are at all familiar with the story will have a good time finding all the references and details.

During the base game, we can see the Queen’s castle in the distance as the playing field is framed by arches as we’re seemingly at the gate. The different symbols are only slightly animated and the biggest thing you’ll see is them disappearing when they’re part of a win. With the varying shape of the reels every spin, I feel like this is a good compromise to keep the slot from being too overwhelming.

The symbols in the slot are divided into the usual high- and low-paying categories. While the low-paying ones are simple card letters drawn in a classic font, the high-paying symbols make up different important characters in the original story.

From most to least important, the symbols include:

The slot has a large number of symbols and although the playing field can be big, it can also be very small, which makes wins a lot harder. As a result, the game lands on High Volatility as expected. Players can change the risk somewhat by picking a bet between £0.20 and £20 per spin, with a max. win of 37,500x your bet to look forward to.

Queen of Wonderland Megaways has quite a number of features. To get a clear overview, first a quick list of the features:

Most of the game takes place in the base game, as I found both the bonus game and the free spins mode difficult to activate. Between the megaways feature and the cascading reels, the screen is very busy and it can sometimes be difficult to see winning bet lines. Luckily, the game lights up the symbols involved and shows the total coin win on the screen.

The Respins mode will change the screen to show a set number of reels and rows, replacing all symbols with either empty tiles or a random coin win. The player starts with 3 respins, during which a coin win can be added to the screen. Each time a coin win fills a tile, the 3 respins reset.

If there are 3 spins without a new coin win, all coin wins on the screen are added together and awarded to the player. During this mode, there is a special 100x coin win.

I thought the bonus game was the most interesting and lucrative part of the game, and it activated more frequently than the free spins. Even though statistically, the free spins should have the bigger opportunity of getting a big win, I found it to be rather disappointing most of the time.

Fans of Alice in Wonderland will no doubt enjoy the sights of this slot, but even those that are more neutral about the classic story will have a good time playing this game. There are a lot of features that each have a big impact on the game, so players that prefer a simple fruit machine will most likely want to avoid this slot.

The features make sense and work well together, but players shouldn’t expect an overabundance of wins. Instead, these are spaced out considerably and will only appear now and then. When they do, your funds can expect a big boost but it remains to be seen if it is enough to recover your losses.

If you like to watch a bunch of colourful characters while you play a rather bombastic slot, Queen of Wonderland Megaways might be up your alley. I had a good time playing this game and I think a lot of other players will too.

Browse casinos with Queen of Wonderland Megaways and other slots from iSoftbet. Create an account and try the game for free before making a deposit.

You can play Queen of Wonderland Megaways in English, Finnish, Swedish, German and 23 other languages. 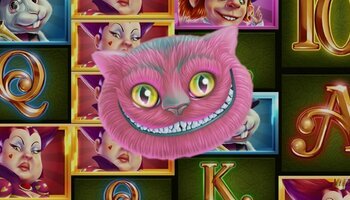