Queens & Diamonds is a slot with perhaps the clearest title ever as it presents us with the ability to play with symbols based on queens and diamonds!

Set in a classic gambling hall, the Queens & Diamonds slot has its 5-reel, 3-row playing field filled with different paintings of famous queens while the other slots are represented by different kinds of diamonds. When it comes to originality, I’m not sure if I should class it as extremely basic or very clever!

Created by RedRake Gaming and released in 2015, Queens & Diamonds seems to be an attempt at the developer to introduce a slot that resembles classic games but introduces several modern features.

The graphics look great, with authentic-looking paintings of different queens from history. The gems meanwhile look a little simpler but nonetheless very distinct and detailed. Getting a win on any of the 20 paylines will make the different gems light up slightly before they disappear while the painting simply shines and fades away.

The music is unfortunately very simple. We can hear a short guitar strum whenever the reels drop away and a quick hard sound when there is a win but not much else. Only during the free spins mode did the music kick in a bit more to make it sound exciting.

The symbols in Queens & Diamonds are rather basic but clear and easily distinguishable. The different paintings are probably based on real paintings but that was hard to find. In the same vein, if you’re not very familiar with classical queens most of these paintings won’t tell you who they are which is why I describe them below by how they look and not their actual names.

The payouts for the different symbols are rather high considering the small number of symbols there are, and the cascading reels mechanic might result in extra opportunities for getting a win but still, the slot only has a Medium Volatility. Even though it’s quite likely to get a win, these are usually only small and with the low-paying symbols. It would often only barely make me my bet back, which is why I think the volatility is fair.

Queens & Diamonds has a few different features that are largely disconnected. In most slots I’ve seen with Cascading Reels there are usually some combinations of features tied together, such as an increasing multiplier or sticky wilds. None of that here. The reels are cascading and that is all there is to this feature.

The Cascading Reels are the largest and most important feature in Queens & Diamonds as it triggers every time there is a win. Due to the small number of different symbols, I found myself to get wins frequently which would result in multiple cascading reels.

The Wilds would play an important role in this as they showed up quite often as well. Most of the wins were only three-of-a-kind which kept the total win amount rather low. Bigger wins would often be the result of multiple cascading reels in a row.

During my time playing, the Free Spins mode was extremely rare. I didn’t see it pop up once during more than an hour of play and I had to come back to the game at a later time to try again. Even then I only saw it appear once. The fact it only grants players 6 free spins and the still disappointing win I got out of it made it not only feel irrelevant to the game at large but also unnecessary.

I would not recommend players to stick with this game solely for a chance to look at the free spins mode as it did not pay off. The max. win of 538x your bet is extremely low for a slot with such a difficult free spins mode, and it did not feel worth the time I put into getting the mode to activate.

Queens & Diamonds is an interesting idea that sticks very close to its title in both creativity and implementation. The idea is probably more fun than what RedRake Gaming decided to do with it. Adding some paintings as symbols is a clever idea but also takes away from the originality. The soundtrack was underused and rather bland.

When it came to the gameplay I was entertained enough by the frequent wins due to the cascading reels. The Free Spins mode, in contrast, was a big disappointment and not worth the time or effort it took to trigger it.

Players that enjoy a classic slot with one big departure from the normal gameplay will probably like Queens & Diamonds. People that have a special affinity with classical royalty might also get a kick out of this. Other players are probably better off looking for different slots with a more enticing set of features.

Browse casinos with Queens & Diamonds and other slots from RedRake Gaming. Create an account and try the game for free before making a deposit.

You can play Queens & Diamonds in English, Finnish, Swedish, German and 19 other languages. 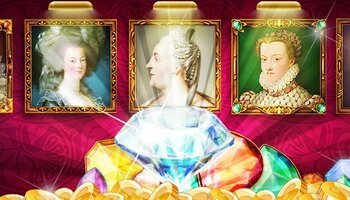