The sun-god Ra is so legendary that he's made as a symbol on countless online slots. Ra's Legend, however, puts him at the game's summit from where he can cast his will upon us mortals and on our attempt to win up to 1000x the bet.

Red Tiger Gaming has given the falcon-man-god a dignified representation. He's drawn and rendered in an omnipotent form and the temple-temple that he's presiding is absolutely stunning.

I can't stress it enough how enamoured I am with the graphics of this game. I've played it multiple times and was never disappointed by the reel adventure that can unfold across a four-row, five-reel playing field. What keeps me returning to Ra's Legend is the bonus features and the medium variance that matches perfectly the symbol payouts.

Ra's wild symbol can pay up to 1,200x your payline bet for five of a kind, but isn't the only symbol that can do that. I think this is one of the best Red Tiger games and one that has aged exceptionally well regardless of the fact that its release date was June 2017.

The theme of the game is clearly Ancient Egypt, but the premise is quite engaging as you are looking at the base of a temple, which is the reel set. But in order to reach Ra and discover Ra's Legend, the random number generator has to take you up the steps and to the top where an instant win of 800x is glowing in its full golden glory.

I found the graphic design to be of a similar look and feel to that of NetEnt's Egypt-themed slots. The high-paying symbols are represented by various brooches made of Egyptian symbols such as the eye of Horus, the golden falcon, the ankh symbol and the scarab.

One of the parts of the game that I like the best is when floodlights made of blue photons illuminate the reels in order to announce Ra's expanded wild symbol.

I was getting a lot of close calls - two of these symbols, which had me rattled plenty of times, but I did get the bonus feature to trigger twice. I don't know if it'll be worth the wait to any of you slot players out there.

Realizing Ra's Legend is medium variance, it makes sense that the bonus is going to be rare, but the big payout from it may be in the works when the free rounds finally trigger.

There are three things that I really enjoy about Ra’s Legend: the graphics, the random features and the fact it has 40 active paylines. The latter element is a balancing act against the game’s medium volatility.

The symbol payouts are quite decent, that is if you get a decent number winnings consisting of four or five symbols, but they'd be working against an infrequent payout rate.

So I've noticed plenty of times that when the game makes a medium or a big win, it's usually stacks of the same symbol, plus the wilds, across multiple paylines.

The royal cards' symbols and the ten-card can pay between 4x and 120x your payline bet and the high-paying symbols can pay between 20x and 1,200x. As I said, there are two symbols that can pay 120x, 600x and 1200x your bet - that's the Sacred Wild and the Golden Eye of Horus symbol.

I was able to try the game with 20p per spin on my first sitting, which is decent enough of a wager for that purpose. The game can take bets between that amount and 80 pounds.

I was into this game and kept playing it for a while. I still think about playing it occasionally because it's just a good game all around.

I don't know if I can recommend it to anyone because of the infrequent payouts. It's best to get familiar with the game first and then make the bets that you usually prefer to make.

The highlight of the game for me is not the free spins bonus, which is like I said, rare, but the Sacred Wild symbol, especially if it drops with three respins or more.

Browse casinos with Ra's Legend and other slots from Red Tiger. Create an account and try the game for free before making a deposit.

You can play Ra's Legend in English, Finnish, Swedish, German and 18 other languages. 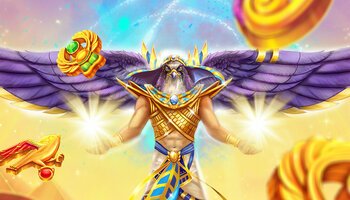