Rabbit Hole Riches - Agent of Hearts is the latest Play ‘n GO slot that brings us into the world of Alice in Wonderland. We follow the white rabbit all the way down only to find a game with non-standard reels, cluster pays mechanic and free spins.

The slot was released in 2021 which shows us exactly where the studio is at when it comes to its design policies and gameplay focus. I found the game to look very nice with a tonne of details that relate to the books. The designers clearly took a lot of inspiration from other media as well, including the animated movies as well as the newer live-action versions of this story.

It’s immediately obvious that the game is built around a large playing field that’s roughly 7x7 in size, but with a chunk of 6 tiles missing from the top. This is literally locked away behind the free spins mode, where this chunk is unlocked to make it easier to get a win. Since the slot uses the cluster mechanic there are no win lines. Instead, the player has to try and get a cluster of 5 or more symbols touching each other horizontally or vertically.

Everything about the presentation of the game wants to drive home the idea that you’re in Wonderland. The 4 main characters have their own trackers on the left side of the screen, and filling up the tracker triggers a special feature as well as a brief animation. In the background, we see glimpses of the larger world with floating islands and other peculiar details.

Rabbit Hole Riches - Agent of Hearts uses a wide selection of symbols to fill up the reels, and it does this in a reasonably creative way. While the low-paying symbols aren’t exactly the pinnacle of creativity they at least fit the look of the game. Although ironically, in this case they could have used card letters because of the Queen of Hearts. The developers decided not to do this however.

The other symbols in the game are the various characters that we know from the famous story. These are drawn in a semi-realistic way and are somewhere in between what we’ve seen before. They all look excellent and come with some subtle animations that make them come to life. All in all, I was impressed with the way it was presented.

Players can expect High Volatility when playing this game with an RTP of 96.25%. This is about average for the volatility. To deal with it, the player can choose a bet between £0.20 and £100. There is of course also a maximum win of 5,262x your bet. This is also about average when comparing it to other slots with the same volatility. No surprises there.

Rabbit Hole Riches - Agent of Hearts includes a nice number of features without feeling too overwhelming. Most players will likely at least be familiar with the non-standard reels and cluster pays mechanic for it not to feel like something completely new.

Most of the slot takes place in the base game, with the player attempting to get the biggest possible clusters. Things are kept interesting thanks to the different trackers on the side of the screen. If players manage to get a win with 1 of the 4 characters that will fill up the tracker. When there are 6 wins on the tracker, it activates the random symbols feature.

This feature works the same every time, but the way it is implemented varies. If you get the Dormouse to activate, he’ll walk along the playing field, leaving behind a trail. This trail of tiles will then either transform or be removed. The Cheshire Cat has the same effect, except in the shape of a giant smile. The Caterpillar blows a cloud of smoke across the playing field, also doing the same thing.

When this happens, about half the affected tiles are removed and the other half all turn into the same symbol. It can create a bigger cluster but more often than not it only helps the reels cascade. I didn’t find this to be particularly helpful.

The free spins mode is activated by getting 3 Key symbols on the screen at the same time. This bonus game plays largely the same as the base game, except all trackers are filled.

Rabbit Hole Riches - Agent of Hearts is a slot that definitely enjoys taking its inspiration from the source material. The design is excellent with a lot of attention to detail. There is a lot to see here, helped by a large number of animations in the game.

The gameplay is interesting and appealing but you do have to accept the non-standard reels as the starting off point. If you prefer classic slots with standard reels and paylines, this is not the game for you. Nonetheless, the different features kept me engaged.

Players that enjoy a high volatility game that strays away from the classic gameplay will likely get some enjoyment out of this slot. The jackpot is about average but that doesn’t mean it can’t result in a very tidy sum.

Browse casinos with Rabbit Hole Riches - Agent of Hearts and other slots from Play'n GO. Create an account and try the game for free before making a deposit.

You can play Rabbit Hole Riches - Agent of Hearts in English, Finnish, Swedish, German and 30 other languages. 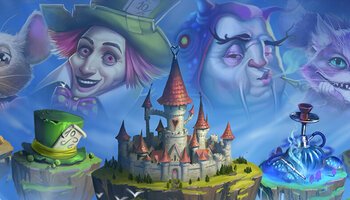