There’s a magical tea party happening at Rabbit Hole Riches - Court of Hearts and you are invited. Get ready to slide down the rabbit hole and discover a land where the impossible becomes possible in this 5-reel, 3-column slot, with 10 fixed paylines.

Here you will come face to face with the strangest of creatures and you might even be lucky enough to encounter the Queen of Hearts herself. When winning symbols are removed, cascading tiles will take their place creating the possibility of even more wins.

This is a whimsical slot with dark imagery which gives a nod to Tim Burton’s Alice in Wonderland. The music perfectly fits the theme of the game and the FX elevate this slot to a truly fantastical experience.

High-paying symbols take inspiration from the most-loved imagery in Alice in Wonderland. The lower-paying symbols are represented by intricately drawn card suits.

At any point during both the base game, the White Rabbit can appear and gift you with a guaranteed 2 Scatter symbols. All you need is for the third one to appear to trigger the bonus round.

At any point in the game (even during cascading tiles and the free spins - a Rabbit Hole can randomly appear and award 1 of 3 features.

In this instance, the Cheshire Cat will appear as a full Wild reel. As the symbols cascade, he will move position until no more winning combinations can be created.

The blue Caterpillar will award between 4 and 7 wilds and these can appear anywhere on the reels. If the wilds are used they will disappear and tiles will continue cascading until no more winning combinations are left.

Door mice are known to be small creatures but in Wonderland things work a little differently. In this feature, the Doormouse will award a Mega Wild that can grow up to 4x symbols in size.

This slot is the sequel to the 3 x 3 slot and thankfully (for me) has a lot of the same imagery and whimsical features. I have to admit I am a huge fan of anything Tim Burton does and whoever designed these slots is, without a shadow of a doubt, a Burton fan. Even the background has the right amount of eccentricity you would expect. The colour palette, the way the characters are drawn, even the game animations all have a Burtonesque feel to them.

Wins do tend to happen often although these are generally below the bet amount. The amount of features in the game means there is excitement lurking behind every corner. The Rabbit Hole bonus appeared quite often for me and although my wins always hovered around the 5x mark it got my heart beating.

Enter the bonus game and then the fun starts. Getting into the bonus round wasn’t too hard especially with the help of the Rabbit Reward. Once there, you can see how that max win of 8,500x can be achieved. I kept watching in awe as more scatters appeared to the reels which meant more spins. Then, the multipliers kept stacking and at one point I was up to x12. I won a respectable 55x here but when I entered the bonus round the second time I only registered a 9x win and on the third go I registered a 10x win.

So you can certainly feel the high variance in this game, and you can also see the potential for some truly fantastical wins. Bottom line, if you’re a fan of the whimsical and macabre and looking for a highly volatile slot then you might just have found your match.

Browse casinos with Rabbit Hole Riches - Court of Hearts and other slots from Play'n GO. Create an account and try the game for free before making a deposit.

You can play Rabbit Hole Riches - Court of Hearts in English, Finnish, Swedish, German and 30 other languages. 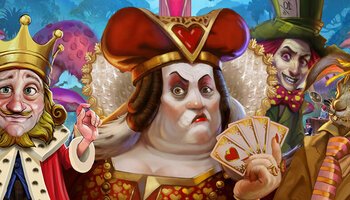