Rage of the Seas slot review

Play Rage of the Seas

Rage of the Seas is set during pirate times when dangerous criminals roamed the seas and attacked merchant ships for their loot. Relive those times with this NetEnt slot as we use Expanding Reels, Random Wilds and Free Spins to get our hands on the booty.

This slot was released in 2020 and it isn’t shy about showing off its graphics and animations. The 5-reel, 4-row playing field is shown off the back of a giant galleon as it makes its way across the ocean. The game uses an expanding reels feature which can add another 3-reel, 3-row playing field on top of the existing reels, creating a total of 5,488 Ways To Win.

The ship is made to look pretty realistic through the use of 3D graphics and some subtle animations. We can see the ship sail over the water as dark clouds hang overhead, while lanterns sway and occasionally cannons fire. Whenever an extra reel is unlocked, a monkey climbs out of the slot and crawls up the back windows.

When it comes to the sound-design, Rage of the Seas offers some unique music as well as a couple of fun sound files. At the start of the game, we hear a pirate voice welcoming us. The music playing is reminiscent of sea shanties, often including people singing. I thought that was a nice way of giving the slot some character in a fitting way.

Rage of the Seas features a large number of original symbols which is partially why the slot has High Volatility. All of the symbols are created specifically for this game, some of them representing characters or animals while others are more generic ship items. Whenever they’re part of a win they will play a brief unique animation, with only the Wild and Expanding Reels symbols triggering something a bit more substantial.

The very low payouts are a result of the high number of win lines in the game, ranging from 1,024 to 5,488 ways to win. The game doesn’t require symbols to appear on set places on the reels but are counted when they appear on consecutive reels from left to right. By triggering the Boost symbol and adding additional reels the player increases the total ways to win.

The features in Rage of the Seas largely have to do with the expanding reels and granting the player more ways to win. Considering the very low payouts for single wins the game expects you to get several wins at the same time in order to maximize your profits.

You’ll find the following features in this slot:

The Ways To Win feature is active during every part of the slot, both the base game and the free spins mode. I found this to trigger wins relatively often, but the payouts are very low, and you will need more than a single win to make back your bet.

During the base game, players can activate several of the special features. All of the features come back during the free spins mode as well, but it depends exactly what shape they take. When the free spins mode is activated all 3 expanding reels are active too, creating the maximum number of Ways To Win that is available during Rage of the Seas.

Getting a Boost symbol on the screen will activate a single expanding reel and often trigger 4 feature spins as well, which is the name they use for free spins. Players can activate a maximum of 3 Boosts at the same time, as there are only 3 Expanding Reels available.

During the Free Spins mode, a multiplier is activated as well. This can be a small 2x multiplier or it can be bigger. Either way, I believe it is random as there was no way of manipulating it. The Free Spins mode was often the best way to get big wins, and during my time playing I ended up in the positives by quite a margin.

Rage of the Seas is a good-looking NetEnt slot with a strong sense of identity. The pirate theme isn’t the most original setting, especially considering this developer itself has been making pirate games since Ghost Pirates from 2009. Still, they managed to give it some special twists that make it feel rather fresh and exciting.

The features in Rage of the Seas are rather unique, with special mention to the Expanding Reels. Adding up to 3x3 extra tiles definitely helps a lot in creating wins, especially in combination with the Ways To Win mechanic. I found my funds to go up steadily as I played, but I would still advise caution because of the high volatility.

Players can pick a bet between £0.20 and £400 per spin which is obviously a huge margin. The max. win of 27,440x your bet is also enormous compared to other slots. It never really felt like I was close to hitting the jackpot but even mediocre wins were often more than enough to increase my funds substantially

Play Rage of the Seas for free

Browse casinos with Rage of the Seas and other slots from NetEnt. Create an account and try the game for free before making a deposit.

You can play Rage of the Seas in English, Finnish, Swedish, German and 20 other languages.

Rage of the Seas supports GBP, EUR, SEK, NOK and 33 other currencies. 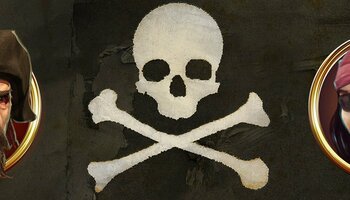