Ragin’ Buffalo takes a look at the great American prairie and puts into a new exciting slot for players to try out. Be prepared for ravenous animals, great animations and a collection of interesting features.

This slot was developed and released by RedRake Gaming in 2015, filling its 5-reel, 4-row playing field with an assortment of animals most commonly found on the American plains. Each of these come with their own set of animations as well as different special features. The background is unfortunately not as creative, putting us squarely inside a gambling hall with other RedRake Gaming slots in the back!

With its 1,024 betlines the game makes it very easy to get a win since any combination of 3 or more symbols on consecutive reels from left to right will be enough to trigger one. There is even a free spins mode that gives another boost to the theoretical wins and it popped up enough to be considered an integral part of the game.

When it comes to sound, this developer seems to prefer things toned down and in the background. We hear a continuous banjo tune play as the reels spin, only interrupted by a rather jarring electric jingle when there’s a win.

I found that RedRake Gaming struggles with choosing a theme and sticking with it. On the one hand, they went for a prairie theme with its symbols and music while on the other hand, sticking to the gambling hall idea with its background and winning jingles. It makes things feel rather disconnected.

Ragin’ Buffalo has a selection of unique symbols based on American animals, filling out the collection with standard high cards. These card symbols look rather strange, with bright colours that clash with the earth-tones of the rest of the slot. They also come decorated with little crowns and shields, again disconnecting from the prairie theme.

Because of the rather large number of symbols, half of them low-paying, the game only comes to a Medium Volatility even though the wins I did get were rather frequent. Most of the time they weren’t that big however and only barely recouped my spending.

The game has a nice but small collection of features that I found to complement the classical style of the slot fairly well. Each of the features appear often enough to make an impact but not so often they become trivial.

The 1,024 betlines were very beneficial in creating regular wins during the base game and also made the free spins mode likely to award wins. The only requirement is that the symbol appears on consecutive reels from left to right to count as a win. The scatter symbols, which also act as free spins symbols are the exception: these count anywhere on the screen.

The Wilds appeared rather frequently during my time playing Ragin’ Buffalo, adding an extra option of creating a winning payline. Even so, the medium volatility was rather obvious. Due to the large number of different symbols, it stayed uncertain if there would be a winning payline.

I found the Free Spins mode to activate pretty often, at least once every hundred or so spins. The nature of the slot meant that any free spin was likely to result in a win, which made them beneficial for my funds. I also noticed that Scatter symbols are likely to show up during the Free Spins mode, each granting an extra free spin.

While the Free Spins mode is activated, any Wild on reels 2, 3 or 4 will increase the multiplier on that line by 2x or 3x. Since there are 9 slots on those 3 reels this can be a maximum theoretical multiplier of 27x any wins during that spin. Unfortunately, the Wilds are not sticky so it resets every spin making it very unlikely a player will ever get that high.

Overall, I thought the features were pretty interesting and showed up enough to feel like they were part of the game. They also helped keep the wins flowing semi-regularly, even if they were often not big enough to win back the funds I used to spin.

The Ragin’ Buffalo slot is a game that sums up my feelings about a lot of RedRake Gaming slots: they have an interesting theme but it gets lost in the execution. The setting is pretty unique and fun, but they don’t have it encompass the entire experience. Instead, they make it obvious that it’s a slot set in a gambling hall, emphasised by the background and the weird sound effects. Meanwhile, everything ‘inside’ the slot is based around the theme including the music and the symbols.

Most players won’t really mind I imagine, focused instead on the features. Those are a lot better, considering their frequent appearances. The high number of paylines make it likely to get a win while the Free Spins mode shows up often enough to really boost a player’s funds. The max. win of 7,680x your bet is enormous, especially compared to other games by this developer that often don’t even break 1,000.

If you’re looking for a fun, simple slot that doesn’t require much from its players than Ragin’ Buffalo will be perfect for you. The features are exciting without being overbearing while the graphics and sound are good enough to keep you entertained.

Browse casinos with Ragin' buffalo and other slots from RedRake Gaming. Create an account and try the game for free before making a deposit.

You can play Ragin' buffalo in English, Finnish, Swedish, German and 19 other languages. 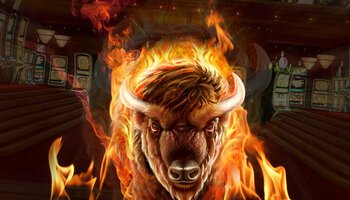