It’s the golden age of dinosaurs and the ones with the biggest teeth were thriving. Released in 2019 Raging Rex is an impressive slot game where the ominous meteorite does wreak havoc but also unearths some wild riches.

Raging Rex has over 4,000 paylines, which can mean quite imaginative winning combinations. The game is also filled to the brim with interesting features, and not all of them are locked away with the free spins which is a nice thing!

This slot is highly volatile with the RTP of 96.34%. The level of volatility is somewhat equal to the risk, so it means that the winnings of the game are scarce and their size can vary greatly. The RTP, short for “return to player” expresses how much of the wagered bets are returned to the players as winnings. But, keep in mind, this is calculated by playing the game for hours, and usually playing just a few spins can result in pretty much anything.

So, let’s travel back in time and see if we can spot the fearsome king of dinosaurs!

Raging Rex takes us to the forests of the long-lost world. It’s hot, it’s humid, and giant dragonflies buzz around. There’s a sort of suspension in the air, it’s almost tangible - will it be a verdant meadow behind the trees, or a giant dinosaur, annoyed by your presence?

The green shades of the forest get some colour from the nicely stylized symbols. The best-paying symbols are, of course, dinosaurs. I dare to say that I recognised at least two species in addition to the T-Rex, the one with three horns is Triceratops and the one with the cool crest is Parasaurolophus. But, one can get only as far with their dinosaur knowledge by watching Jurassic Park fifteen times.

The game has some cool animated effects, too. The best, in my opinion, is the Rampage feature where the enraged T-Rex is stomping right at me.

Raging Rex has a nice ambience with exotic (and probably extinct) birds calling and the drums beating the rhythm. I would love to listen to this as it is, but sadly, the sound effects of the winnings and buttons ruin the atmosphere a bit too much. However, I do like the dinosaur roars when they form the winning combination.

Raging Rex has six reels, four rows and 4,096 paylines, meaning that the symbols only need to land on adjacent reels starting from the first reel to win. So, the placement of the symbol on a single reel doesn’t matter.

During the basic game, the free spins can be activated by landing at least three meteorites on the reels. On top of that, the basic game has one more feature that can trigger randomly and along with it comes a full reel of wilds.

When the mighty T-Rex goes on a rampage it transforms one of the reels to a full-sized Wild. After this, the game activates free re-spins and the T-Rex moves one reel to the left. Re-spins continue until the dinosaur has reached the leftmost reel.

The number of free spins depend on how many meteorites hit the earth:

Before the free spins start, it’s up to the player to choose either Wild hunt or Primal Rage.

Raging Rex is an exciting slot with a dinosaur theme. What’s not to like? Especially for dinosaur fans, this game is a guaranteed hit. Not as dark as the Microgaming’s Jurassic Park slot, but sure to be just as fun.

Raging Rex is also a quite typical high-volatile slot. Playing it requires time, moderation and the will to take risks. In my case, I usually play this slot with small to medium-sized bets and play more spins rather than go big with my stakes and spin fewer times.

When triggering the free spins, I typically choose the Wild hunt. Yes, it’s harder to get good wins out of those because winning depends more on how many (if any) Wilds land on the reels. With the Primal rage, one reel is always a giant Wild, so it’s more likely to win something. But, with the Wild hunt, the possibility of several multipliers is more tempting.

Browse casinos with Raging Rex and other slots from Play'n GO. Create an account and try the game for free before making a deposit.

You can play Raging Rex in English, Finnish, Swedish, German and 30 other languages. 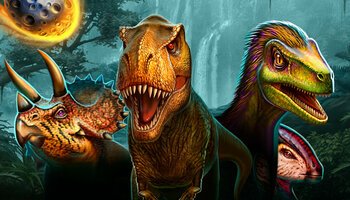