Rainbow Jackpots Power Lines is a variation on the original Rainbow Jackpots, this time with special power lines and a bigger playing field. It also has a special bonus game, colossal symbols and stacked wilds.

This slot was developed and released by Red Tiger in 2020 as a sort of sequel to the original that was released 4 years earlier. This time, the game features a non-standard playing field with 6 reels and between 2 and 7 rows each spin. The total paylines also change, going from 4 to 49 bet lines. All of this is done while using simple but colourful symbols that give the game its Irish charm.

When talking about the animations we can expect a variety of things that liven up the game. Of course, the main game has enough animations whenever there is a win, but these are usually quite simple. On the other hand, triggering special features will usually include a leprechaun to stroll by or for the game to switch to another location.

If we listen to the soundtrack we’ll notice that there was quite a lot of attention put into this aspect of the game. The base game features a rather soft but original song playing in the background while getting wins or activating features will trigger its own sounds. The leprechaun that appears also makes different types of sounds.

The game features an average collection of different symbols that help it reach its High Volatility. Payouts aren’t very high but it is possible to get more than one winning bet line at a time which will help improve it.

The symbols you’ll find in Rainbow Jackpots Power Lines include:

The slot only pays out small amounts per pay line, which can be compensated through the features and larger bets. Unlike most other Red Tiger slots, this one allows players to pick a bet between £0.10 and £100 per spin. Players might also hit the jackpot, which is a max. win of 1,225x your bet. This is comparatively low when looking at their other slots.

Rainbow Jackpots Power Lines has a number of features, some of which impact the base game, there is a bonus game as well as a free spins mode to look at.

The main feature and the one I think is also pretty rare in slot-land, is the varying size of the slot. Where it can be only 6-reel, 2-row one spin it can turn into 6-reel, 4-row the next and 6-reel, 7-row the one after that. This also changes the number of paylines on the screen.

If it’s a good or a bad feature, I’m not really sure about. Since the number of win lines changes with the size of the playing field it didn’t feel like any of them was more or less advantageous than any other. As such, the feature felt mostly visual and not necessarily impactful.

The game does frequently add stacked wilds to the screen, adding a reel full of wilds. This can be helpful or not, but since every spin has 6 rows this has little impact on the odds of winning either. It can happen that more than 1 reel is filled with Wilds, at which point it obviously does become more interesting.

With 3 Triple Beer bonus symbols, the bonus game is activated. Players are placed in front of a beer tap and given 1 of 3 empty glasses. After choosing one, each of them fills with beer. When it stops, the player receives the coin win associated with the glass they chose. It’s a simple feature but the instant coin win is obviously nice.

I thought the features are interesting and offer a lot of variety, but at the same time I never really felt like they had a very large impact on the gameplay. The bonus game is activated quite often and grants an immediate win. The free spins mode was more volatile but usually also resulted in a larger coin win.

Rainbow Jackpots Power Lines is a fun new rendition of a game that’s become a classic at this point. It offers some new features and an updated look without going too far from the original. If you were a fan of the original Rainbow Jackpots you might want to give it a look.

The gameplay is pretty unique and probably not ideal for players that prefer a steady, standard slot. There are a bunch of features to take into account as well as the ever-changing playing field. The volatility was high and I found my funds to stay quite close to the starting point, but it also managed to drop quickly a few times. Once you hit a positive, I would suggest cashing out and not waiting too long.

There aren’t a lot of games I’ve played that had changing playing fields with every spin so if you’re interested in that mechanic, definitely check this game out. Casual players might be a little annoyed by the variety of features but more experimental people can get a kick out of this.

Browse casinos with Rainbow Jackpots Power Lines™ and other slots from Red Tiger. Create an account and try the game for free before making a deposit.

You can play Rainbow Jackpots Power Lines™ in English, Finnish, Swedish, German and 18 other languages. 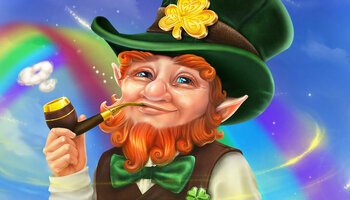