Rainbow Jackpots brings the Irish outside to life, being accompanied by a leprechaun as the reels get filled with lucky symbols and plenty of paylines that might live up to the Irish’ reputation!

This very green-looking slot was developed by Red Tiger and released back in 2016, which has helped it in becoming one of the bigger successes by this developer in the meantime. The game doesn’t look spectacular but makes good use of its 5-reel, 3-row playing field with a usual 20 bet lines. The game is filled with Irish symbols while the rest consists of card letters.

When it comes to setting the mood, Rainbow Jackpots struggles a bit as most of the screen is filled by the playing field. What little we can see of the surroundings shows us rolling green hills in the distance, while ancient Celtic designs frame the slot. It looked nice but did little to help with the theme. The liberal use of the colour green does enforce the Irish influence on the game.

The music was exactly what you’d expect from a game with a setting such as this. There is an up-tempo but soft-playing Irish jig playing in the background during the base game. Wins are punctuated a little by a short jingle before the song resumes. Only the free spins mode and bonus game offer a little more variation. Whenever the leprechaun appears you’ll hear him speak in a thick Irish accent before he adds random wilds to the screen.

The symbols in Rainbow Jackpots are largely what you’re used to seeing in slots with this theme. A green top hat, lagers, horseshoes and lucky clovers. It’s not overwhelming in their originality but at least their designs are original.

The same can’t be said of the low-paying symbols, which are static card letters in different colours. It’s a very simple design which lacks any sense of originality or even a willingness to invest any creativity in their form.

The game has a listed High Volatility, mostly due to a large number of different symbols compared to the smaller playing field and the low number of bet lines. I found the volatility to fit my experience as the regular game would very rarely grant me any wins. The wins I did get were a good amount, however, so there is some benefit to the base game. Still, most of the gameplay revolves around activating any of the special features.

There are some impactful features in this game, consisting of a bonus game, a free spins mode and randomly triggered Wilds.

The Wilds show up very frequently during the base game, often filling entire reels or appearing on multiple reels at the same time. That doesn’t mean they facilitate a lot of wins just as often but when they do it’s likely to trigger a number of them at the same time.

While playing in the base game, the leprechaun character can wander past the screen and toss a few Random Symbols onto the screen. I’m not sure if it’s explicitly mentioned anywhere but I got the idea that this would always create at least 1 win line. Regardless, it was a good thing when he showed up. Also, pay attention to his voice lines as he wanders past!

The Bonus Game triggered relatively often in my experience. It requires 3 Bonus Symbols consisting of a series of pints. The symbols are very obvious compared to all the green and gold art. Once you get 3 of them on the screen you trigger the bonus game.

In the bonus game, you’re presented with 3 empty glasses. You simply pick one and watch as all 3 glasses fill up with some delicious dark lager. As they fill up you’ll also see their respective coin values to see if you made the right pick. Once the glasses stop filling up, you’ll instantly receive the coin win of the glass you picked. It’s simple but effective and allows the player some choice in their gameplay.

Once you do get in you get to choose 1 of 3 symbols. Each holds a number of free spins. I saw that it was between 8 and 12 free spins but I’m sure it’s possible to get more as well. Once the free spins start the leprechaun can appear more frequently to add Random Symbols to the screen, making every spin likely to create at least 1 win. I still found it to be rather underwhelming and wouldn’t really say it’s worth it playing to hit this part of the game.

Rainbow Jackpots is a mixed bag when it comes to the complete picture. The graphics are okay but not overly original, with many of the symbols being very simple card letters. Wins are shown by lines showing the paylines, not by lighting up the tiles as other slots do. The music is acceptable but nothing groundbreaking either.

The gameplay is a lot better, but still not perfect. Where the Random Symbols and Bonus Game both appear frequently, the Free Spins mode was almost as rare as a unicorn. The game is clearly balanced around the special modes to appear rather often so maybe I just had a bad day. During my time playing, I found my funds steadily declining and I never really went into positives.

It’s possible to pick a bet between £0.10 and £100 per spin which helps with mitigating the risks. A max. win of 1,054x your bet isn’t terrible but considering the high volatility it’s also not as big as I would have expected.

Browse casinos with Rainbow Jackpots and other slots from Red Tiger. Create an account and try the game for free before making a deposit.

You can play Rainbow Jackpots in English, Finnish, Swedish, German and 18 other languages. 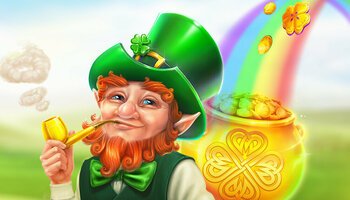