Rapunzel’s Tower takes its inspiration from the famous fairytale that focuses on the princess in the tower, who uses her long hair to facilitate her rescue. In this slot, it means additional free spins and excellent multipliers.

The game was released by Quickspin in late 2017, presenting its idea in a beautifully animated style that resembles the famous children’s movies that have been portrayed in so many fairytales. The different elements all work towards setting the scene, with on the side of the reel the famous tower with our heroine looking out of the window.

The 5-reel, 3-row playing field comes with 20 paylines and a number of characters most people will be familiar with: the king and queen, the handsome prince and of course the jealous witch. I was a little disappointed to see the symbols weren’t animated when they’re part of a win. The game still showed a bit of movement with a swirling fire on tiles that are on a winning payline.

I found the music to be very soft and rather quiet. There isn’t a lot of energy and the tune loops quickly. When there are sticky wilds or the free spins mode activates there are some more energetic tunes, but overall I didn’t think the sound design was very noteworthy.

The character symbols of Rapunzel’s Tower are original drawings of characters done in a cartoon style. The developer used colour and composition to keep them distinct from each other. The exception is the Wilds, which come in two variations but both look gold. That sometimes confused me, especially because they function in different ways.

Meanwhile, the lower-paying symbols are card letters. Although they use a classic font that fits the fairytale theme, they’re still the odd ones out.

Looking at the symbols, starting at the highest, they are:

There are quite a few different symbols, coupled with the relatively low number of paylines which makes this slot land within the Medium Volatility range. That’s why I found the coin wins to be pretty even across the board, with only a small increase in the max win between the lowest and highest regular symbols.

In my experience playing this slot, you mostly get wins through the use of the Wilds. This happens regularly enough to be interesting but wins aren’t often very big.

Rapunzel’s Tower kept itself rather light on features but they did make some use of the concept of Rapunzel and her hair in the free spins mode!

During the base game, there is only one special feature that affects the gameplay in any substantial way. The Hair Wilds act like regular wilds when there are less than 3 on the screen and they work together with the Rapunzel Wilds too.

If the player manages to get 3 or more on the screen, their secondary function is revealed. Here, they become sticky and trigger a re-spin. The number of re-spins depends on the time it takes to get any win, which can be a single spin or a dozen. Either way, the re-spins don’t stop until there is a win. When that happens there is a payout and the game resumes as normal.

I thought this was a fine addition to the game but it is not affected by the player at all and rarely facilitated any particularly big wins. I assume they can help if regular Wilds appear during the re-spin, but that didn’t happen in my time playing.

Once you reach the top, you get a final extra 2 free spins and all wins during the remainder of the free spins mode will get a 2x multiplier. I thought that was quite disappointing since a 2x multiplier isn’t very high anyway and I imagined it would double all wins that were collected during the Free Spins mode. That’s not the case. Only the wins made after the prince reaches the top are multiplied, which made it considerably less interesting.

All in all, a slot can never go wrong with a free spins mode. They are free spins after all. I also liked that it was relatively easy to get at least a few extra spins. I only hit the top of the tower once, but getting just 2 or 4 extra spins is a nice boon. I would have liked to have seen the multiplier be applied to all wins though, as it was already pretty lacklustre and now even more so.

Rapunzel’s Tower is a fun, lighthearted slot that takes a popular fairytale and turns it into an accessible game. The features it includes are simple and obvious and most players won’t take long figuring them out. I did think the Rapunzel and Hair Wilds looked too much alike, which was sometimes confusing since one of them triggers special features and the other does not.

The game comes with a max. win of 1,619x your bet which is a nice amount without being impressive. Players can influence the size of their bets between £0.20 and £100 per spin. All of this is rather middle-of-the-road which is also how I would describe this game!

If you’re a fan of fairytales or simply looking for a casual slot to get some quick spins in, Rapunzel’s Tower will probably scratch that itch. If you’re someone who goes for high volatility games or slots with a tonne of unique features, you won’t find it here.

Browse casinos with Rapunzel’s Tower and other slots from Quickspin. Create an account and try the game for free before making a deposit.

You can play Rapunzel’s Tower in English, Finnish, Swedish, German and 23 other languages. 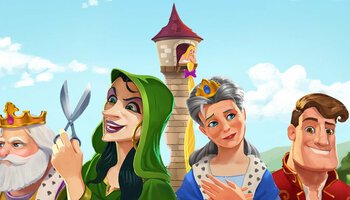