Charge up a quantum leap and tear holes through the parallel universes. Reactoonz is a game full of energy and chaos.

In 2017, Play’n GO released Reactoonz, a sequel to Energoonz. Reactoonz takes everything that was good in the original and pushes it even further. This is one sequel that has made the original obsolete.

Reactoonz is not your average slot. It is played on a 7x7 grid and it has no paylines. You win if there are five or more of the same symbols in a cluster. Energoonz and Gemix were one of the first slots of this kind, but it is NetEnt who has become well known for their Cluster Pays mechanic. They have even trademarked the name.

Reactoonz is a game full of special features, random bonuses and all kinds of chaos. This is a double-edged sword, as it is hard to understand what is going on. It took me a good while to figure out what each special feature is and how they work, and I have played a ton of different slots.

Reactoonz is a light-hearted sci-fi slot full of aliens. The visual style is an improved version of Energoonz, which means cute creatures with varying amounts of eyes, bolts of electricity zapping across the stage and quantum vortexes opening portals to distant universes. So, your typical sci-fi stuff.

Reactoonz has a fairly unique look that is easy to recognise and easy to use. Every visual aspect is made to be user-friendly. I found it to be easier to learn all the mechanics by playing the slot, rather than reading the rules.

The game sounds like any other space-themed game. This is a part that could use a little work, as it is so forgettable. It’s not bad, but just not something you would remember after you close the game.

There is one thing that is worth a mention. The aliens do sound a little like the Minions. So, if you aren’t a fan of the yellow buggers, you might want to mute the game completely.

The symbols are all made up of cute little aliens. The one-eyed little ones are the lower-valued symbols and the bigger, more matured two-eyed ones are the high-value symbols. They are somewhat colour-coded, but only three out of the four aliens follow that system.

During the normal play, there is one special symbol in there as well. That is the wild quantum vortex. This symbol can only be created by other features and will never just fall from the top of the screen.

Reactoonz is based on chain reactions. A single win is always tiny, but it will cause a cascade effect and new symbols fall in to fill its place. It is like the Avalanche mechanic in Gonzo’s Quest.

Reactoonz is a high-volatility slot with an RTP of 96.51%. To win big, you need to chain up multiple smaller wins and keep the wheels spinning. A single spin will basically never be worth your wager.

In every round, there are some random aliens that glow. If you get them in a winning combination, they leave behind a wild quantum vortex.

Each time the first spin in a round doesn’t get a winning combination, the great Gargantoon may send in some wild vortexes. If the Instability feature activates, you get 4-8 wilds added to random places on the field.

Aliens are very adaptive and can change size and combine with each other. If you get a 2x2 square filled with one type of alien, they combine into a Giantoon. Giantoonz are counted as four symbols, but they double every win they are a part of.

Every time you win anything, you charge up your quantum machine. Get enough juice and you get a full charge of a random type. A charge is used when you get a spin with no winning combinations. Your round is over when there are no wins available and you have no charges left if the quantum machine.

There are four different charges:

What you get is chosen randomly, but you can tell what you have in store by the colour of the charge.

If you manage to fill up the entire Quantum Feature, you get a visit from the great Gargantoon. This 3x3 alien is a gigantic wild, which will deteriorate over time. The Gargantoon will stay in place but divide into smaller creatures with every spin.

I have always been fascinated by slots that do something different. That is why I liked Energoonz and was interested in Reactoonz when I first heard about it. Innovation is key when it comes to good game design.

Reactoonz is not the simplest of games. If you read the rules, you might spend a good moment trying to figure out how things work. I tried that and didn’t quite understand everything. When I started to play, then it all made sense. So, what is the solution? Just go and play, you’ll figure everything out soon enough.

When the slot gets going, it is a wild ride. The quantum charges can keep the game moving for a good while, and if you get up to Gargantoon, you are in for a treat.

For me, this is an interesting slot, but not a one that I would play often. It is fun to play, but the volatility is just a tad too high for my taste. The game is a bit chaotic and a lot is determined by random events. If you like a game with high volatility and the possibility of a super valuable spin, then Reactoonz is definitely worth a look.

Browse casinos with Reactoonz and other slots from Play'n GO. Create an account and try the game for free before making a deposit.

You can play Reactoonz in English, Finnish, Swedish, German and 30 other languages. 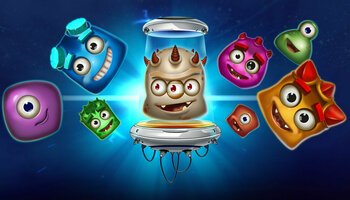