Reactor is a slot that takes place in the core of a giant radioactive reactor, using different elements to power our wins as well as creating all sorts of unexpected bonuses.

Created by Red Tiger and released in 2018, Reactor is a slot that takes a simple concept and stretches it to make a slot out of it. The background and the symbols all work together to create the illusion of standing in front of some futuristic reactor core where different types of elements are cycled through. The game has a 5-reel, 3-row playing field and 20 betlines that pay both ways.

Red Tiger is in my experience a developer that often spends some time on the development of a concept but never really brings it all the way home. Reactor is a pleasant exception as the theme is carried through the entire slot, from the background and symbols to the implementation of the different features.

An appropriate song for a game set in a reactor is difficult to decide so the industrial techno song the developers went with fits as well as anything. The jingles that play when there’s a win might not really match the setting but they go well with the music.

Reactor has completely original symbols to fill up the reels, each of them somehow related to the reactor theme. The symbols use a combination of colour and shape to keep them easily distinguishable, with the special feature symbol a futuristic-looking battery to have it stand out more.

The game has a High Volatility which is why the payouts for winning betlines is rather high. I found that a lower bet was the best way at getting through the spins with minimal losses and a steady increase for my funds. Betting too high would often result in heavy losses since there was too much time between wins. Players can choose a bet between £0.10 and £20 per spin to decide their risk.

Reactor has a smart selection of features that come in a staggered approach. The Wilds and Pay both Ways features are always activated, while the other features are dependent on the number of Bonus symbols on the screen. There are a total of 5 special features that activate in order, each additional Bonus symbol activating another one.

The total features of Reactor are:

Since the bonus features are typically all resolved on the same spin, players aren’t required to keep track of the different features. The order is always the same and they only appear for a single spin. There is a convenient tracker at the top of the screen using symbols to represent the different features. This tracker displays which ones were triggered and if they’ve been played already.

I found the features to be very enjoyable and they really emphasised the high volatility of the game. During the base game wins were rather infrequent but getting one or more Bonus symbols would be almost a guarantee for a big win and a spike in coins. The fact it always works in the same order meant it kept things clear as well.

Reactor might seem like a simple slot as it never leaves the base game and features are only activated for a single (re-)spin but the way it works is excellent. The order of features is set, with the tracker at the top of the playing field showing you which ones are activated. During the bonus features, they are named on the screen as well to reduce any confusion.

I would recommend this slot for most players. Only people that are completely against anything that deviates from the classic slot experience will not enjoy this slot as it does introduce several modern features. Otherwise, people will very likely have a good time playing this game.

Other than the modern features, the only thing that people might feel are missing is the lack of any free spins or bonus game mode. The entire slot takes place on the main screen and offers no variation in terms of background or setting. However, I consider the opportunity of winning a max. win of 5,000x your bet a good incentive to give it a try!

Browse casinos with Reactor and other slots from Red Tiger. Create an account and try the game for free before making a deposit.

You can play Reactor in English, Finnish, Swedish, German and 18 other languages. 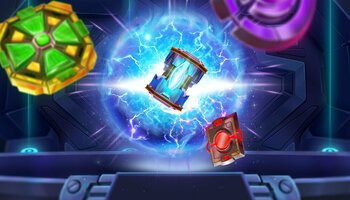