Red Diamond is a game by Red Tiger Gaming that was released back in 2018. By all means, I think it can still hold its own because it is one of the few virtual slots machines that have been made exceptionally well. Otherwise, the game is very simple and doesn't boast of any features, except respins, which is a major part of the gameplay.

Players who've tried the catalogue of games by Red Tiger may recognize in it a replica to the Emerald Diamond slot. The two games have identical appearance, an identical payout structure, except for the maximum payout potential, which is 1500x your bet in that other game.

Nevertheless, emerald green or ruby red, these twin slots can arrange for a fun-loving adventure for any player, especially for those who enjoy retro games that come with a fine, polished appearance.

You can call Red Diamond a 'pokie' because its symbols can be found on any slots machine made between the 1900s and 1990s. The only fruit symbol on the paytable is the cherry, with the rest being variations of the BAR symbol, the red hot sevens and diamonds.

Those who haven't seen any of the gameplay on Red Diamond are going to be in for a nice surprise because Red Tiger has furnished it with moving parts, dynamic reels and visual effects that are pleasing to the eye.

As for the sound design, the game shares the same soundtrack and audio effects as on Emerald Diamond. I hold no grudge against Red Tiger for double-dipping in the same bowl of sounds because both games are identical and because I can jam to that piece of music for long before getting bored of it.

Other than the single extra feature, Red Diamond plays like a typical retro game, but there are few details regarding the payouts that deem the game worth trying.

You can play Red Diamond starting with 20p per spin, which isn't a whole lot to probe into the game mechanics and get a feel of the high variance. As for the payouts, just like Emerald Diamond, the game has a positive payline structure.

A single cherry symbol that lands anywhere on the payline, pays back the bet at 1x. Two cherries pay double at 2x and three cherries pay 5x your bet.

Any variant consisting of the BAR symbols pays 10x, which I think is a solid amount to start the medium-tier payouts. Winning outcomes for the single, double and triple BAR symbols pay 15, 25x and 40x your bet.

The high payouts of 80x and 800x come with three sevens and three diamonds respectively and the Red Diamond jackpot prize of 1,500x comes with three wilds. The respin following the triple wild win can result in the ultimate prize of 2,000x.

I like both Red Diamond and Emerald Diamond. I think there is a slight difference in the variance. I can feel that the former is way up high while the latter is moderately high. Nevertheless, the variance makes big wins possible but keep in mind that the lower payouts come at a sparser frequency.

Bottom line, the game is able to hold your attention, meaning it will take some time for the gameplay to get boring. I’ve found it dynamic enough to go for dozens of spins, but that didn’t get me any closer to a triple-diamond or triple-wild win, which is not to say it isn’t possible.

Definitely a thumbs up and worth trying.

Browse casinos with Red Diamond and other slots from Red Tiger. Create an account and try the game for free before making a deposit.

You can play Red Diamond in English, Finnish, Swedish, German and 18 other languages. 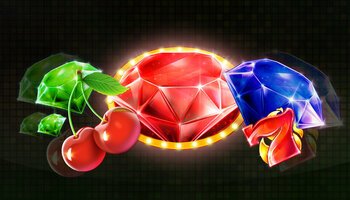