Red Riding Hood is probably one of the most famous fairytales ever told. Exploring this story as a slot is sure to bring some excellent surprises.

Red Riding Hood is a slot created by developer Netent and released in 2016. Ever since then I’ve considered it one of their most popular and well-liked slots. In fact, if I want to teach someone about the type of games Netent makes I use this game as my example. With its 5-reel, 3-row and 20 payline layout it is built on the standard slot approach and has added a bunch of features on top of it.

As part of the Fairytale Legends series by Netent, there’s plenty more like it to enjoy. If you like exploring magical forests, Hansel & Gretel is for you. Mirror Mirror meanwhile has many of the same features but adds a new bonus game and a different design. Finally, there’s the famous Jack and the Beanstalk. This slot uses different features that might offer some nice variation for some players.

It simply has everything Netent does well. Excellent graphics, a fitting soundtrack and a great amount of detail put into the game. Combine that with a whole plethora of features, all in the style and context of the original fairytale.

When we start up the slot we find ourselves on the road to Grandmother with Red Riding Hood. She’s always on screen in the lower-left corner. As soon as we start spinning, she begins to walk. As she walks the background slowly moves along, really giving the impression that we’re travelling. I thought this was an excellent little detail and considering how much of the fairytale is about her journey, it makes sense to be part of the game.

Netent always puts a lot of attention in the appearance of their slots and it’s no different with Red Riding Hood. Even after a couple of years, the game holds up well compared to newer games. Red Riding Hood herself has a unique cartoony design, as do the other characters in the game. There is plenty of movement in the slot as you play, even though most of the symbols are static.

Accompanying us on our trip is a fitting soundtrack, classic fairytale music that keeps the tone light and magical. Wins on a payline trigger a short jingle. If we get a special appearance by the Fairy God Mother the music turns into something even more mythical. As with the graphics, I’ve come to expect this level of quality from Netent and they deliver!

Red Riding Hood has a series of standard symbols based on high playing cards. These are slightly modified to fit the theme but not that much. The higher-paying symbols are specifically made to go with the fairytale story and look great.

I understand why developers don’t want to design completely new symbols for the entire game, since knowing some familiar symbols might be comfortable for players. At the same time, I wonder if Ace and King symbols fit a story about a girl walking through a magical forest.

As you can see that’s quite a lot of different symbols, which makes it harder to get a win. Although the game lists itself as having Low Volatility, during my time playing I found myself going without wins for quite a while. When I did get a win, those were often pretty high. If I hadn’t looked it up I would have said Red Riding Hood has medium volatility. Something to keep in mind!

I found that lowering my bets a bit worked better since there can be quite some time between wins and with a max. win of 600x your bet I found it difficult to win back my spent coins with one win. The ability to choose a bet between £0.20 and £200 helps to keep it fun.

Netent loves its features and Red Riding Hood is an example of that. There are a lot of features to go over so I’ll get started:

That’s quite a list, isn’t it? I thought so too, but a lot of these features don’t overlap so you only have to deal with one or two at a time. The Wilds and Treasure Chests appear throughout the game, but the three Fairy God Mother surprises are random and never appear at the same time. They also don’t require any input from the player so you can just sit back and watch her fill your reels with Wilds or Stacked Symbols!

Meanwhile, I found the Treasure Chest to only trigger very rarely. When it does you have to choose 1 of 3 chests. This will either grant you 10 free spins, a coin reward or start the Beware the Wolf Bonus Game.

This is the only true departure from the classic slot experience in this game. The reels are replaced completely with a beautiful map of the forest. You click on the map, it selects a random number and moves Red Riding Hood that number of steps.

Depending on where she stops you can get a coin value, a jackpot, it can give you a final payout or you can get caught by the Big Bad Wolf! When that happens, you keep your winnings and return to the base game.

I thought this was an excellent, unique addition to the game that offers a nice variation on the classic slot gameplay. It did not appear too often to get annoying, and it was also the only time the Wolf appeared in the game.

Red Riding Hood is one of the most famous Netent slots and it’s easy to see why. It has everything that I’ve come to expect from Netent games ever since I first played it back in 2016. I still come back to it often when I’m looking for something pretty, sweet and filled with features.

Personally I think I prefer Red Riding Hood above all of these. It has the best graphical design, a fun concept they worked off of and it just plays very nicely.

Keep the slightly misleading volatility in mind, and I can almost guarantee you’ll have a great time playing it too.

Browse casinos with Red Riding Hood and other slots from NetEnt. Create an account and try the game for free before making a deposit.

You can play Red Riding Hood in English, Finnish, Swedish, German and 20 other languages. 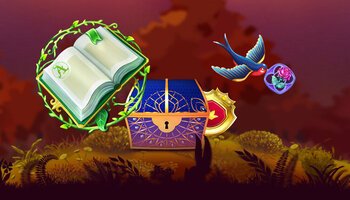