Join the Reef Run race and see who is the fastest creature of the deep blue sea. Bet on the winner and win extra prizes.

Reef Run is one of the first slots that the developer Yggdrasil ever made. It was released in 2014, while the company itself started in the previous year. I find it interesting to see the steps Yggdrasil has taken over the years, as they rose from nothing to one of the leading figures in the industry in about five years.

The first thing you’ll notice is that this particular slot looks old. A bit older than it actually is. Yggdrasil currently employs a lot of great artists, but they clearly weren’t around when Reef Run came out.

Unfortunately, this is not the only problem this slot has. The graphical design is something that shouldn’t be done today. This slot is built on racial and national stereotypes that simply are not acceptable any more.

Reef Run is a slot with an interesting theme, to say slightly. This is a slot that probably no developer would release nowadays. The game looks a bit older than it is, but that is not the issue here. The sea creatures are based on racial and national stereotypes.

A shrimp with slanted eyes and a Fu Manchu moustache, a Mexican styled crab with a bushy moustache and eyebrows and a Latina octopus with big lips and clam for a fan. These are just some of the things that this slot has that just don’t fly in this day and age.

The music is an adventurous and oceanic song, which suits the theme perfectly. It is fun to listen and doesn’t immediately loop itself. It is long enough to give some variance.

When you start playing, I bet you can quickly tell why I had to mute the sound effects after the first minute. They are annoying, loud and they repeat constantly. I felt like I could punch the snail for the stupid sound it makes.

The slot features a surprising roster of symbols. There are only six sea-creatures as the regular symbols and one special clam in the game. I can’t remember when was the last time I saw a game with this few in total.

The clam is a scatter and will activate the Free Spin feature. Get at least three of them anywhere and you get to spin for free. The more clams you get, the more spins you will have available in the feature.

The pay structure is built in a way that you want to get more of any single symbol, rather than just the better symbol. Three of anything isn’t worth much, but even five of the worst is. The pufferfish is the most valuable symbol and a great example. With a 20 coin wager, three fishes will pay out 30 coins, four will pay 200 and five will give you a massive 1,000 coin prize.

The slot has a medium volatility but trying to get any good wins feels like a chore. I felt that during the regular game, I was just constantly losing and the little wins I got was just slowing it down. The Free Spin feature and the Bonus Game are where the big wins are, but even they can leave you empty-handed.

On a positive note, as the Free Spin feature is the big-ticket item, it activates fairly often. I didn’t have to wait for too long to get from one to the next.

The clams are the treasure chests of the deep sea. Find at least three of them and you activate the Free Spin feature. The clams are a scatter symbol, so you don’t even need to get them on a single payline. Find three and you get 10 spins, four will give you 20 spins and five award you with a whopping 60 free spins. You can even get extra spins during the free spins.

During the free spins, the symbols will level up with massive multipliers. After every winning combination, the winning symbol is given a better multiplier. First win will increase it to 5x, second to 10x and third to 20x.

The game has an extra betting option for 5 coins per round, the Golden Bet. It does absolutely nothing during the regular game but will activate the bonus game when you start getting to the Free Spin feature.

At the start of the free spins, you get to choose one symbol you think will win the Reef Run race. Whichever symbol wins you the most coins during the free spins is the winner. If you guessed correctly, you get a mystery prize. The minimum and the maximum for each symbol are shown next to them.

This is a fun bonus game. Will you go for a symbol that comes up often, but only pays a small amount, or will you go for broke with a valuable and rare symbol?

I have played a lot of slots from Yggdrasil, but some of these older ones I didn’t get to play back in the day. It has been fun to go back and see what they were doing before they got famous. With this particular one, nothing of real value was missed.

Reef Run is a perfect example of how Yggdrasil needed a little time to get their head in the game. Only a year later they released Chibeasties and Holmes & The Stolen Stones, which were both proper hits.

But as for this one, I think we can just bury this slot in the sea. This is a slot that would not be released ever again. The stereotypical depictions are just not what we want today.

Although, credit where credit is due, the Reef Race bonus game is fun and I hope that Yggdrasil will use that idea elsewhere.

Browse casinos with Reef Run and other slots from Yggdrasil. Create an account and try the game for free before making a deposit.

You can play Reef Run in English, Finnish, Swedish, German and 11 other languages. 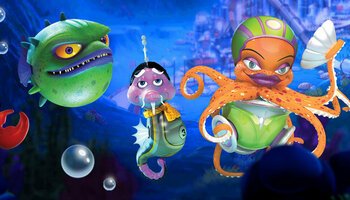